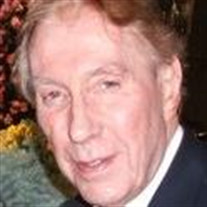 Richard A. Hill, 84, of Danvers, died Wednesday, April 19, 2017 at Beverly Hospital. He was the husband of Virginia (Mahn) Hill, with whom he shared twenty-eight years of marriage. Born in Everett on April 13, 1933, he was the son of Charles and Helen (Lynch) Hill. He was a graduate of Everett High School. A proud Double Eagle, Dick went on to earn both his bachelor’s degree and master’s degree from Boston College. He served honorably in the U.S. Army during the Korean War. He began his career as a Professor of Marketing at Boston College and then taught at Northeastern before moving on to Salem State University, from which he retired after twenty-eight years in 2002. During his tenure at Salem State, he taught the capstone course in the Marketing Department. A Danvers resident for nearly thirty years, he also resided in Reading for many years. He was a member of the Knights of Columbus, Reading Council #1031 and enjoyed skiing, golf, travel, and Boston sports. In addition to his wife, he leaves four daughters, Tricia Hill of Sharon, Christine Hill of Lynnfield, Kathleen Hill of Austin, TX, and Peggy Stone and her husband Jeffrey of West Tisbury, eight grandchildren, Kyle and Kayla Sheehan, Emily, Daniel and Joseph Staffier, and Jessica, Brittany and Matthew Stone, his great-granddaughter, Lucia, his brother, John G. Hill of Lynn, and several nieces and nephews. He was predeceased by his brother, Paul C. Hill. His Funeral Mass will be celebrated on Saturday, April 22, 2017 at 11AM in Saint Richard Church, 90 Forest St., Danvers. Burial will follow in Holy Cross Cemetery, Malden. Relatives and friends are invited. Visitation is prior to the Funeral Mass from 9-10:45AM in C.R. Lyons & Sons Funeral Directors, 28 Elm St., Danvers Square. In lieu of flowers, donations in Dick’s name may be made to the American Cancer Society, 30 Speen St., Framingham, MA 01701. www.LyonsFuneral.com.

Richard A. Hill, 84, of Danvers, died Wednesday, April 19, 2017 at Beverly Hospital. He was the husband of Virginia (Mahn) Hill, with whom he shared twenty-eight years of marriage. Born in Everett on April 13, 1933, he was the son of Charles... View Obituary & Service Information

The family of Richard A. Hill created this Life Tributes page to make it easy to share your memories.