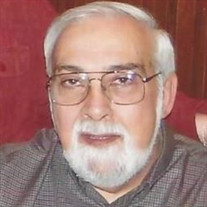 Richard J. Claveau, 72, a longtime Danvers resident, died Monday, May 4, 2020 at Massachusetts General Hospital after suffering a sudden illness. He was the husband of Diane S. “Dido” Claveau, with whom he shared 51 amazing years of marriage. They were kindred spirits. Born in Salem on Feb. 29, 1948, he was the son of the late Lorenzo and Helen (Kowalski) Claveau. He was raised and educated in Salem and was a 1965 graduate of Bishop Fenwick High School. He furthered his education at Salem State College. Dick began his career at Sears and Roebuck in automotive sales. He then went into the photography business, where he co-owned and operated Dijon Studios. He later became an emergency medical technician and worked for Lyons Ambulance Service until the time of his retirement. Dick was a loving husband and father. He enjoyed traveling and motorcycling with his wife and son, and his pride and joy was his motorhome. He had a great love of the ocean, enjoyed boating, and was an avid fisherman. He also was a volunteer scout leader for many years. He was an animal lover, but had a special fondness for dogs, especially his beloved Harley. In addition to his wife, he leaves his son and daughter-in-law, Brian and Taramae Claveau of Danvers, his sister Loretta Orgettas, and several nieces and nephews. At Dick’s request, there are no funeral services. In lieu of flowers, donations in his memory may be made to the Northeast Animal Shelter, 347 Highland Ave., Salem, MA 01970. Arrangements are by C.R. Lyons & Sons Funeral Directors, 28 Elm St., Danvers Square. To leave a message of condolence, please visit www.LyonsFuneral.com.

Richard J. Claveau, 72, a longtime Danvers resident, died Monday, May 4, 2020 at Massachusetts General Hospital after suffering a sudden illness. He was the husband of Diane S. &#8220;Dido&#8221; Claveau, with whom he shared 51 amazing years... View Obituary & Service Information

The family of Richard J. Claveau created this Life Tributes page to make it easy to share your memories.