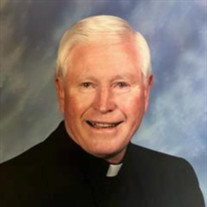 Rev. Henry M. Cunney, 85, passed away on Thursday, April 2, 2020. He was a priest of the Roman Catholic Archdiocese of Boston for sixty-one years. Born in Salem on June 4, 1934, he was the son of the late Henry and Alice (Buckley) Cunney. A son of Immaculate Conception Parish, he was educated in Salem schools and was a graduate of St. Mary’s High School in Lynn, Class of 1951. He attended archdiocesan seminaries and was ordained to the priesthood on Feb. 2, 1959 by Richard Cardinal Cushing. During the next 61 years, his priestly ministry was exercised in parishes and on high school and college campuses across the archdiocese. Between 1959 and 1964 he was an assistant at three parishes: St. Peter’s, Gloucester; St. Andrew the Apostle, Forest Hills; and Blessed Sacrament, Walpole. His first foray into campus ministry was his three-year assignment as chaplain at Nazareth Academy in Wakefield. In 1967 he returned to parish ministry with assignments at St. Agatha, Milton and St. Joseph, Wakefield. Returning closer to home, Father Henry was named chaplain at Bishop Fenwick High School in Peabody in 1970, and in 1973 he was named assistant at St. Agnes, Arlington. In 1976 he was named assistant at St. Mary of the Hills Parish, Milton, remaining there until June 1986. He served again briefly in campus ministry, though this time at the college level, when he served as chaplain at Regis College. He was named parochial vicar at Sacred Heart Parish, Roslindale in 1987 and pastor of Nativity Parish in Merrimac in 1991. He also served as pastor at St. Thomas Aquinas Parish, Nahant. In 2001 he was named parochial vicar at St. Richard’s Parish, Danvers and was named a senior priest of the archdiocese in 2008. He remained active at St. Richard’s for several years until becoming a resident of Regina Cleri, Boston. He continued to remain active while at Regina Cleri, assisting in several parishes and celebrating Mass on CatholicTV. Father Henry loved travel and organizing parish trips both in the U.S. and abroad. Affable and good-natured, he was beloved by both his parishioners and his brother priests to whom he was always ready to help with a smile and kind word. He was also a passionate sports fan and followed all of Boston’s teams and the Notre Dame Fighting Irish. Predeceased by his brother, G. Vincent Cunney, he leaves behind family including several nephews and a niece and many cousins. Graveside services will be held privately in Saint Mary Cemetery, Salem. A Memorial Mass will be announced at a later date. In lieu of flowers, donations can be made to clergytrust.org/regina-cleri.

Rev. Henry M. Cunney, 85, passed away on Thursday, April 2, 2020. He was a priest of the Roman Catholic Archdiocese of Boston for sixty-one years. Born in Salem on June 4, 1934, he was the son of the late Henry and Alice (Buckley) Cunney.... View Obituary & Service Information

The family of Rev. Henry M. Cunney created this Life Tributes page to make it easy to share your memories.