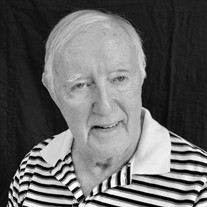 Raymond Short, a 7 year resident of Brooksby Village in Peabody, and former resident of Melrose and Holliston MA, passed into eternal life on July 7, 2017 at his residence following a lengthy struggle against Parkinson's & Lewy Body Disease. Ray was 80 years old. Ray was born on September 15, 1936 in New York City, the eldest child of the late Joanna (Quigley) Short and Joseph V. Short. Ray grew up in the NY/NJ area until the family relocated to the UK in 1950. He attended high school there and, upon graduation, enlisted in the Army. Ray was stationed in Germany with the 10th Mountain Division. After his service, he enrolled at the University of Connecticut graduating with a degree in business in 1962. While at UCONN Ray met Marilyn Tuller who would become his wife, and they were married June 9, 1962. Ray worked at Proctor & Gamble for 4 years as a sales representative in metro NYC. In 1966 he joined Allyn & Bacon publishing where he would stay for the remainder of his career retiring in 1998. During his tenure there Ray occupied a number of sales, sales management, and editorial roles. He enjoyed his work, and made some life-long friends while there. Upon retirement Ray and his wife became full time grandparents, and traveled extensively in North America and Europe. They also spent part of their winters on Estero Island in Fort Myers Beach, Florida. Ray enjoyed running, exercise, music, reading, tackling the "honey do" list, and attending his children's (& later grandchildren) activities. For the last 20 years of his life, he loved being known as Papa, and was thrilled to share his name with his grandson. Ray joins his beloved wife of 50 years, Marilyn (Tuller) Short, who passed in 2012. He is the devoted father of Leslie Adams of Wilmington, North Carolina and Daniel G. Short and his wife Patricia of Melrose. He is the loving Papa to Matthew Short and Michaela Short both of Melrose. Ray leaves 2 sisters Constance Short of Clinton CT, and Kathleen Fox and her husband Parker of Branford CT. He was preceded in death by sister Judith Short. Ray's family would like to thank his care givers over these last years. The staff at Brooksby Village, Care Dimensions Hospice, and Home Instead Senior Care. The family is particularly grateful to Donna Dolliver who was wonderful to Dad these last 6 years. Relatives and friends are invited to attend a Memorial Celebration of Ray's life Saturday August 26. 2017. The service will take place at 3pm in the Garden Room at Braeburn Gardens, 400 Brooksby Village Drive, Peabody MA. His interment will follow the ceremony in Lake Grove Cemetery in Holliston. In lieu of flowers, memorial donations in Ray's name may be made to National Parkinson’s Foundation National Parkinson Foundation (www.parkinsons.org ) 200 SE 1st Street Suite 800 Miami, FL 33131 or Care Dimensions Hospice (www.caredimensions.org ) Ste. B-102, 75 Sylvan St, Danvers, MA 01923.

Raymond Short, a 7 year resident of Brooksby Village in Peabody, and former resident of Melrose and Holliston MA, passed into eternal life on July 7, 2017 at his residence following a lengthy struggle against Parkinson's & Lewy Body Disease.... View Obituary & Service Information

The family of Raymond G. Short created this Life Tributes page to make it easy to share your memories.

Raymond Short, a 7 year resident of Brooksby Village in Peabody,...