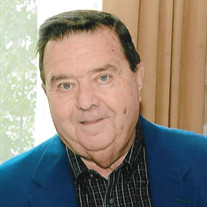 DANVERS- Raymond J. Jalbert, 78, passed away peacefully on December 29, 2021 surrounded by his family after a long and courageous battle with liver cancer. He was the loving husband of Mary E. (Qualey) Jalbert with whom he shared 53 years of marriage. Born in Salem, MA, he was the son of the late Raymond and Mary (Wholley) Jalbert. He graduated from St. James School and was a proud member of the Salem High School Class of 1960. After attending Newman Prep School he enlisted in the U.S. Marine Corps – graduating from Aviation Ordinance School and was a member of the Marine Attack Squadron. He served in VMA 225, VMA 22, and VMA 333. He worked out of Quantico Marine Base as an instructor for new pilots on ordinances. His last assignment was the NAS Roosevelt Rhodes Naval Air Station in Puerto Rico. After his enlistment, Ray worked for a short time with the New England Telephone and Telegraph Co. In 1968 he joined North Shore Optical Co. and went on to obtain his optician license. Professionally he worked for 50 years in the optical field – the last 25 as Optical Manager for Costco Optical and then NE Regional Manager. Ray especially loved all the children he treated teaching them “Ray’s Rule” – If the glasses are not on your face, they’re in your case. Ray also obtained his A.B.O. and N.C.L.E. licenses. During this time he also taught classes at Newbury Junior College of Ophthalmic Dispensary and Geometric Optics. While making a home in Danvers, Ray was active in many community organizations throughout the years. He coached his sons’ baseball and soccer teams, was Youth Group Leader at St. Richard’s Parish, Cub Scout Troop Leader, and volunteered for the Boston Crusaders Drum & Bugle Corps. He was also one of the founding members of the Danvers Youth Soccer program. Ray was an active member of the Essex County Detachment 127 Marine Corps League and was past Commandant. He was also the co-coordinator for the Detachment 127 Toys for Tots Drive for many years. With the MCL, he did many parades and fundraisers. He especially loved the Vittori-Rocci Post’s Pancake Breakfast Program. Ray is survived by his devoted wife, Mary, and their three sons, Joseph and his partner Karyn of Warren, RI and Michael and Mark of Danvers; two grandchildren, Bryanna and Cameron. He is also survived by his brother, John of Marblehead and his wife Mary Ellen; his brother-in-law Andrew Qualey of Benedicta, ME; his sisters-in-law Therese and Cathy Qualey of South Portland, ME; Reni Qualey of Sherman Mills, ME and her pre-deceased husband Peter Qualey. He is also survived by many nieces, nephews, and cousins. His Funeral Mass will be celebrated at 11AM on Tuesday, Jan. 4, 2022, in Saint Richard Parish, 90 Forest St., Danvers. Visitation will be held from 4-7PM on Monday, Jan. 3, 2022, at C.R. Lyons & Sons, Funeral Directors, 28 Elm St., Danvers. Attendees are required to wear face coverings, practice social distancing, and are respectfully asked for no physical contact with the family. In lieu of flowers donations may be made in Ray’s name to the Essex County Marine Corps League, 20 Stevens St., Peabody, MA, 01960 or Lahey Hospital and Medical Ctr., Oncology Dept., 41 Mall Rd., Burlington, MA, 01805.

DANVERS- Raymond J. Jalbert, 78, passed away peacefully on December 29, 2021 surrounded by his family after a long and courageous battle with liver cancer. He was the loving husband of Mary E. (Qualey) Jalbert with whom he shared 53 years of... View Obituary & Service Information

The family of Raymond J. Jalbert created this Life Tributes page to make it easy to share your memories.