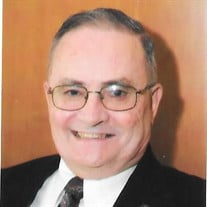 Raymond W. Fontaine, Jr., 79, died Thursday morning, October 5, 2017 at the VA Hospital in Bedford following a period of declining health. He was the loving husband of Charlotte A. (Fennessey) Fontaine, with whom he shared 55 years of marriage. Born in Waltham on Nov. 17, 1937, he was the son of the late Raymond and Edna (Paulus) Fontaine. He was raised and educated in Rhode Island and Detroit, graduating from Servite High School. He later earned his bachelor’s degree from Boston College and his master’s degree from Pacific Lutheran University. A 23-year veteran of the U.S. Army, he served two tours in Vietnam and was the recipient of the Bronze Star. Following his service, he worked for the Department of Defense in Boston and Connecticut until his retirement in 1998. A Danvers resident for 32 years, Mr. Fontaine had resided at Brooksby Village for the last 6 years. He was a member of American Legion Post 180 in Danvers. A loving and dedicated husband, father, and grandfather, he was an accomplished artist who loved oil painting. In addition to his wife, he leaves his children, Edward Fontaine and his wife Patricia of Cohasset, R. Peter Fontaine and his wife Amy of Cincinnati, and Susan Givens of Middleton, five grandchildren, Joshua Givens and Erin, Andrew, Jake, and Lorelei Fontaine, and a sister, Joan Fontaine. His Funeral Mass will be celebrated on Tuesday, Oct. 10, 2017 at 10AM in the Chapel at Brooksby Village, 300 Brooksby Village Dr., Peabody. Relatives and friends are invited. Visiting hours are Monday from 4-6PM in C.R. Lyons & Sons Funeral Directors, 28 Elm St., Danvers Square. Burial will be private. In lieu of flowers, donations in Raymond’s name may be made to the Brooksby Village Resident Care Fund, 200 Brooksby Village Dr., Peabody, MA 01960.

Raymond W. Fontaine, Jr., 79, died Thursday morning, October 5, 2017 at the VA Hospital in Bedford following a period of declining health. He was the loving husband of Charlotte A. (Fennessey) Fontaine, with whom he shared 55 years of marriage. Born... View Obituary & Service Information

The family of Raymond W. Fontaine Jr. created this Life Tributes page to make it easy to share your memories.