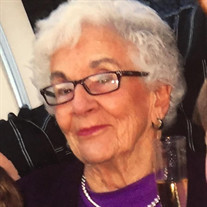 PEABODY-Phyllis E. Fox, died Tuesday April 7, 2020 at Brooksby Village, Peabody, following a long illness. Born April 2, 1930 in Fort Kent, Maine she was the daughter of the late Guy C. and Carrie M. (Landers) Daigle. She moved to Peabody as a young child and graduated from Peabody High class of 1947. After graduating from the Fay School in Boston, she worked at John Hancock in Boston. She later worked for many years at the Peabody Institute Library in Danvers until her retirement. On September 10, 1955, she married the love of her life, the late George T. Fox of Peabody. They shared 46 years together before his death in 2001. They lived in Danvers for 30 years where they raised their four children. After selling the family home George and Phyllis resided in Guilford, NH then Boxford, MA. Phyllis enjoyed many years at Brooksby Village, moving there in 2002 after George’s death. Phyllis loved life and enjoyed people. Together they went skiing, square dancing, and camping. They traveled in later years to Europe, Bermuda and explored the U.S. They loved their camp on Square Pond in Shapleigh, Maine and shared years of memories there with family and their dear friends. Phyllis was known for her love of animals and never spent a day without a cat, dog, guinea pig or whatever stray needed help. Phyllis is survived by her daughter Karen and her husband Stephen Haggstrom of Bradford; her son Timothy and his wife Elaine of Wrentham; her son Brian and his wife Jaci of North Andover; her daughter Jennifer and her husband Thomas Hausmann of Eliot, Maine and her grandchildren Benjamin, Emily, Erik, Danny, Henry and Will. Due to current CDC guidelines a private burial will be held for immediate family. A Memorial Service will be announced at a later date. In lieu of flowers donation may be made in Phyllis’ name to MSPCA at Nevins Farm 400 Broadway Methuen, MA 01844 or Care Dimensions, 75 Sylvan St, Danvers, MA 01923 or Brooksby Village Student Scholarship Fund c/o Philanthropy Office, 200 Brooksby Village Dr, Peabody, MA, 01960. Arrangements are under the direction of C.R. Lyons & Sons Funeral Directors, 28 Elm St., Danvers.

The family of Phyllis E. Fox created this Life Tributes page to make it easy to share your memories.