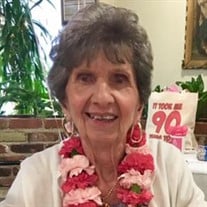 DANVERS- Mrs. Petrina A. (Cacciatore) Coppola, age 90, formerly of Saugus, died peacefully on Saturday December 8, 2018 at home. She was the wife of the late Albert G. Coppola, with whom he shared 62 years of marriage and was the daughter of the late Angelina (Raniere) and Raymond Cacciatore. Born and raised in East Boston, she resided in Saugus most of her life before moving to Danvers in 2013. After graduating from East Boston High, she worked as a secretary at age 16 at Tickner Brothers of Boston. She later worked as a secretary for Forte Dupee Sawyer in Boston. She was very active in her church, Blessed Sacrament in Saugus, where she baked and served at the collations after Mass. She also worked as a poll worker. She loved gourmet cooking and her Italian traditions, shopping, bingo, playing cards, and visiting the cousins. In her younger years, she was an avid bowler. Most of all, she loved spending time with her family, grandchildren, and loving husband. She was very loving and caring and loved by everyone she met. Petrina is survived by her son; Albert S. Coppola of Danvers, her daughter Nancy M. Bray & her husband William of Danvers, grandchildren; Angela M. Bray of Boston & Christopher W. Bray of Danvers. Petrina is also survived by 12 godchildren and several nieces and nephews. She was predeceased by her siblings, Dominic, Joseph, Stephen, Giacomo, Angelo and Annetina Cacciatore. Her Funeral Mass will be celebrated at 9AM on Wednesday, December 12, 2018 in Saint Richard Church, 90 Forest St., Danvers. Burial will follow in Woodlawn Cemetery, Everett. Visitation will be held from 4-7PM on Tuesday, December 11, 2018 at C.R. Lyons & Sons, Funeral Directors, 28 Elm St., Danvers. In lieu of flowers donations in his memory may be made to the American Heart Association, 300 5th Ave Suite 6, Waltham, MA 02451.

DANVERS- Mrs. Petrina A. (Cacciatore) Coppola, age 90, formerly of Saugus, died peacefully on Saturday December 8, 2018 at home. She was the wife of the late Albert G. Coppola, with whom he shared 62 years of marriage and was the daughter of... View Obituary & Service Information

The family of Petrina A. Coppola created this Life Tributes page to make it easy to share your memories.