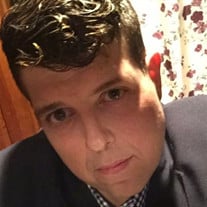 DANVERS- Peter Jon Morency, 44, died Tuesday evening, July 4, 2017 in Beverly Hospital after suffering a medical episode while riding his motorcycle in Topsfield. Peter was born on February 19, 1973 in Salem Hospital, the son of Sandra J. (Colomy) Morency of Danvers and the late George J. Morency. He was raised and educated in Danvers and graduated from Danvers High School in 1991. He went on the NSCC and then Newbury College, where he earned his culinary degree and graduated summa cum laude. Peter got his start as a chef at the Eastern Yacht Club in Marblehead, from there he went on to the Hartwell House in Lexington, the Pingree School and most recently Hobbs-Brook in Wakefield. Peter had a passion for motorcycles, was an avid sports fan and enjoyed classic rock music. He was an incredible chef and gardener. Peter was kind, friendly and had a fun-loving spirit. In addition to his mother, Sandra, he is survived by his brother, R. Scott Morency of Winchester, his sister, Victoria Morency of Danvers and his nephew, Christopher Morency of Danvers. His Celebration of Life will be held at 11AM on Sunday, July 9, 2017 at C.R. Lyons & Sons, Funeral Directors, 28 Elm St., Danvers. Visitation will be held on Saturday from 2-6PM in the funeral home. The burial is private. In lieu of flowers expressions of sympathy may be made in Peter’s name to Danvers People-to-People Food Pantry, PO Box 2076, Danvers, MA, 01923.

The family of Peter Jon Morency created this Life Tributes page to make it easy to share your memories.