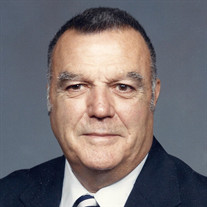 Perley F. Roderick, 94, died Monday morning, October 26, 2015. He was the loving husband of Evelyn (Hilyard) (Demsey) (Curtis) Roderick and the late Lois “Boots” (Ackerman) Roderick. Born in Manchester-by-the-Sea on Nov. 9, 1920, he was the son of the late Perley and Ida (Foley) Roderick. He was raised and educated in Salem and was a graduate of Salem High School. He then served honorably in the U.S. Army during WWII, as a member of the 473rd Regimental Combat Team, and was awarded the Purple Heart for his bravery and selflessness in the fight for Mount Belvedere in Italy. A Danvers resident for more than 60 years, he was employed by the town for 32 years, first as an equipment maintenance supervisor until becoming the Veteran’s Agent, a position he held until his retirement. He had also previously been employed at the former Whittaker Tractor Dealership on Hobart Street in Danvers. Perley was past commander of Witch City Post 1524, Salem VFW, and District 10 VFW, and was a recipient of the VFW Americanism Award. He was also recognized for his service by the DAR. He was a member of the Order of Moose. He leaves a son, James E. Roderick and his wife Cynthia of Florida, two step-sons, Ernest Demsey and his wife Maureen of Topsfield and Gene Demsey and his wife Gail of Danvers, a sister, Helen Putnam, a brother, Robert Roderick, 7 grandchildren, 17 great-grandchildren, 4 great-great-grandchildren and many nieces and nephews. His Funeral Mass will be celebrated on Friday, October 30, 2015 at 9AM in Saint Richard Church, 90 Forest St., Danvers. Burial will follow in Annunciation Cemetery. Relatives and friends are invited. Visiting hours are Thursday from 5-7PM in C.R. Lyons & Sons, Funeral Directors, 28 Elm St., Danvers Square. In lieu of flowers, donations in Perley’s name may be made to the Wounded Warrior Project, P.O. Box 758517, Topeka, Kansas 66675.

The family of Perley F. Roderick Jr. created this Life Tributes page to make it easy to share your memories.