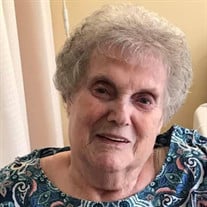 BEVERLY-Pauline J. “Polly” (Brooks) Glenn, passed away on August 3, 2021. She was the wife of the late Robert J. Glenn. Born in Danvers on August 6, 1934, she was the daughter of the late John and Mary Alice (Church) Brooks. She was raised and educated in Danvers and graduated from Holten High School in 1952. Polly had been employed as the unit secretary of the oncology wing at Union Hospital for many years. She enjoyed bowling, traveling and camping and was also a motorcycle enthusiast alongside her husband. Polly loved to watch football and golf, especially her beloved New England Patriots, Joe Montana, and Arnold Palmer. She is survived by her four children, James Glenn and his fiancé, Laura Kramer of Danvers, Steven Glenn and his wife, Judy of Peabody, Timothy Glenn and his fiancé, Marie Bocchino of Wenham and Suzan Glenn of RI. She was the proud grandmother of Uri and Alina Glenn. Pauline also leaves behind her siblings, Paul Brooks of Boxford, Donald Brooks of Danvers and Carol Trodella of Reading and many loving nieces and nephews. She was predeceased by her siblings, John, Richard and Ernest Brooks. Visitation will be held on Sunday, August 8, 2021 from 3-6PM at C.R. Lyons & Sons, Funeral Directors, 28 Elm St., Danvers. Her Memorial Service will be held at 10AM on Saturday, September 11, 2021 in All Saints Episcopal Church, 46 Cherry St., Danvers. In lieu of flowers donations may be made in Polly’s name to The Global Lyme Alliance www.globallymealliance.org

The family of Pauline J. Glenn created this Life Tributes page to make it easy to share your memories.