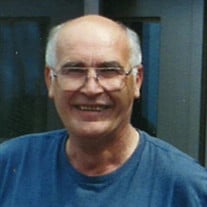 Mr. Paul J. Tutko 80, of Danvers, beloved husband of Dorothy (Shea) Tutko, died Wednesday, December 8, 2021 at Lahey/Burlington Hospital, following a battle with Covid~19. Born in Beverly, he was the son of the late Henry M. Tutko and Helen (Kostyla) Tutko. The oldest of five brothers, he was raised and educated in Danvers and was a graduate of Holten High School class of 1960, where he remained an active alumnus. He is survived by his wife Dorothy, his brothers James Tutko, and his wife Brenda, and Donald Tutko all of Danvers. His nephews, David Tutko of Danvers, Michael Tutko, and his wife Holly of Concord, NH; James P. Tutko, Jr., of South Boston; nieces, Erica Tutko of Boston, and Hillary and her husband Chris Petryshin of Hingham, MA. Great-nephews, Ben and Olin Tutko, Lucas Petryshin, and great-niece, Eimile Petryshin. Paul was predeceased by his brothers, H. Thomas Tutko and his wife Priscilla, and John “Jet” Tutko. After graduating from high school, Paul was employed for over 35 years by New England Power in Salem. Paul returned to the Peterson Trade School where he earned his First-Class Stationary Engineers License and rose from an oiler to a control room engineer at the former Salem Station Power Plant. Paul was brought up on the Tutko Family Farm on Ash Street in Danvers, where he developed an appreciation for the outdoors. He became a Boy Scout and was a true outdoorsman, trapping, hunting, and fishing during his lifetime. He hiked the Appalachian Trail in the New England states as well as numerous climbs of the tallest mountain peaks in Maine and New Hampshire. He enjoyed spending time at his camp in New Hampshire and canoeing the local rivers. Paul loved to walk, and it was not unusual to spot him in many North Shore Communities. He loved traveling the United States and visiting the National Parks. Following his retirement, he turned his hobby of bottle collecting into a small business that brought him to many auctions and sales shows throughout the Eastern United States. Paul married Dorothy in 2011 and together they continued to travel throughout the United States as well as trips to South America and Russia. He was a member of the Danvers Fish and Game Club and the Merrimack Valley Antique Bottle Club. He golfed and bowled on teams with other New England Power employees. Finally, on Monday nights, over a cup of coffee, he helped solve all of the Town, Commonwealth, and National problems of the day, along with a group of fellow Holten High School "Onion Towners", who met at Dunkin Donuts. His Graveside Service will be Wednesday, December 15, 2021 at 11AM in Annunciation Cemetery, 155 Hobart St., Danvers. Relatives and friends are invited. The family requests that all attendees please wear a mask. There are no visiting hours. In lieu of flowers, donations in Paul’s memory may be made to the Appalachian Mountain Club, 10 City Square, Boston, MA 02129. Arrangements are by C.R. Lyons & Sons Funeral Directors, 28 Elm St., Danvers Square. For directions or to share an expression of sympathy will Paul’s family, please visit www.LyonsFuneral.com.

The family of Paul J. Tutko created this Life Tributes page to make it easy to share your memories.