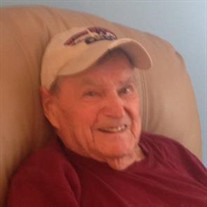 DANVERS- Paul K. Gaudette, 89, passed away peacefully in his home on October 4, 2017. Born in Danvers on April 29, 1928, he was the son of the late J. Arthur and Delia (Fallon) Gaudette. Paul was a lifelong resident of Danvers, one of ten children. He served our country with the United Sates Navy during WWII on the USS Franklin D. Roosevelt Aircraft Carrier and was honorably discharged. Paul was a communicant of Saint Mary of Annunciation Parish. He had been employed as a master machinist for Sylvania for 42 years. Upon retirement, he drove the Sylvania Lighting Van all over the country to service Sylvania trade shows. Paul loved to drive. His love for Disney World lead him to become a greeter and ticket kiosk technician at the former MGM Studios for many years. He loved NASA and with his best friend, Ernie, attended a space shuttle launch. Paul loved life, he was the life of the party and enjoyed family gatherings. He was a true outdoorsman; he loved camping and enjoyed traveling. His favorite destinations were Hawaii, Alaska, Aruba, many family trips to Disney World and Prince Edward Island. Paul extensively followed the construction of the Confederation Bridge in Canada, connecting Prince Edward Island to the mainland. He was one of the first persons to walk the bridge before it was open to traffic. He spent his summers in Moody Beach, Maine and winters in Clermont, Florida. Later in his life, he enjoyed spending time with friends at the Senior Center in Danvers, where he loved playing bingo, listening to jazz music and dancing. Paul’s family would like to thank the staff and volunteers of the Danvers Council on Aging, North Shore Elder Services and First Light Homecare. They kept Paul happy and independent “taking one step at a time”. He is survived by his children; Cheryl Gertz of Danvers, Kevin Gaudette of E. Falmouth, Thomas Gaudette of Thailand, Deborah Mahoney and her husband Stephen of Beverly and John Gaudette and his wife, Cindy of Danvers, his grandchildren, James Gertz, Kathleen Mahoney and James Mahoney, great grandsons Liam and Blake Gertz. He was predeceased by his former wife, Mildred Gaudette. His Funeral Mass will be celebrated at 9AM on Monday, October 9, 2017 in Saint Mary of the Annunciation Church, 24 Conant St., Danvers. Burial will follow in Annunciation Cemetery, Danvers. Visiting hours are Sunday from 3-7PM at C.R. Lyons & Sons, Funeral Directors, 28 Elm St., Danvers. In lieu of flowers, donations may be made in Paul’s name to the Friends of the Danvers Council on Aging, 25 Stone St., Danvers, MA, 01923.

DANVERS- Paul K. Gaudette, 89, passed away peacefully in his home on October 4, 2017. Born in Danvers on April 29, 1928, he was the son of the late J. Arthur and Delia (Fallon) Gaudette. Paul was a lifelong resident of Danvers, one of ten... View Obituary & Service Information

The family of Paul K. Gaudette created this Life Tributes page to make it easy to share your memories.

DANVERS- Paul K. Gaudette, 89, passed away peacefully in his...