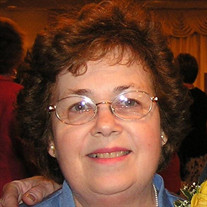 DANVERS- Patricia G. (Morris) Toomey passed away on December 22, 2015. She was the beloved wife of John L. Toomey, with whom she shared 53 years of marriage. Born in Haverhill on October 10, 1940, she was the daughter of the late Patrick and Irene (Angers) Morris. She was raised and educated in Haverhill and graduated from Saint James High School. Pat went on to Merrimack College where she received her bachelor’s degree in Education and then later while raising four children went to Salem State College for her master’s degree. Pat had been employed as a teacher in the Peabody Schools for over 30 years where she influenced countless students from middle school through high-school. She had been very active within her Danvers Community throughout her life, serving as a town meeting and Planning Board member along with many other organizations such as Friends of the Library, Stardusters Jr. Drum and Bugle Corps and the Cub Scouts. Pat attended Saint Mary of the Annunciation Church. She enjoyed sewing and turned that love in to a small, satisfying crafts business. Her love of people, culture and history led her to travel throughout the U.S. and Europe. In addition to her husband, John, she is survived by four children, Shawn Toomey and his wife Jayne of Danvers, Beth Cope and her husband Steve of Raymond, NH, Tricia Toomey of Fitzwilliam, NH and Michael Toomey and his wife Sarah Brown of Brooklyn, NY, her siblings, Candia and her husband Robert LaRochelle of Plaistow, NH, Kathleen Connors and her husband Robert of Sagamore, Michal Hogg and her husband James of Plaistow, NH and Peter Morris and his wife Marie of Terry MI, a grandson, William Cope and two granddaughters Kristyn and Tammy Morrissey. Pat was predeceased by her brother, Robert Morris. Her Funeral Mass will be celebrated at 9AM on Wednesday, December 30, 2015 in Saint Mary of the Annunciation Church, 24 Conant St., Danvers. Burial will follow in Annunciation Cemetery, Danvers. Visiting Hours are Tuesday from 4-8PM at C.R. Lyons & Sons, Funeral Directors, 28 Elm St., Danvers. Expressions of sympathy may be made in Pat’s name to The Michael J. Fox Foundation for Parkinson’s, P.O. Box 5014, Hagerstown, MD 21741.

DANVERS- Patricia G. (Morris) Toomey passed away on December 22, 2015. She was the beloved wife of John L. Toomey, with whom she shared 53 years of marriage. Born in Haverhill on October 10, 1940, she was the daughter of the late Patrick and... View Obituary & Service Information

The family of Patricia G. Toomey created this Life Tributes page to make it easy to share your memories.