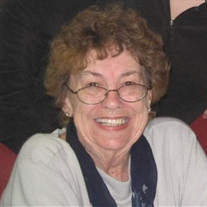 DANVERS- Patricia (Tomeo) McGinn died on Friday, May 3 (the same day her father passed away in 1982), surrounded by her family. She was the daughter of Michael and Katherine Tomeo. She was predeceased by her husband, Thomas P. McGinn, and her children Tish McGinn, Mary McGinn, and Robert McGinn. She is survived by her sister, Catherine Stanton, of Peabody; her children, Kathleen Englehardt and her husband Dave of Peabody, Tom McGinn, Jr. and his wife Donise of Arundel, ME, Mike McGinn and his wife Maripaul of Merrimac, Jerry McGinn and his wife Angela, of Ipswich, and Dan McGinn and his wife Katie Sullivan of Danvers, as well as fourteen grandchildren, thirteen great-grandchildren, and many nieces and nephews. Pat was an ordinary person but extraordinary, also. She was a devoted wife, mother, grandmother, and great-grandmother. She was a fun, hard-working mother to her eight children. They had adventures full of camping trips, days at Devereux Beach, and going to World’s Fairs in New York and Canada. Her children remember the chickens that she raised in their backyard, her love of lounging in the sun, and how, once, on a trip to Newport, RI she sat down in front of a bunch of folk singers and played Bob Dylan songs on the guitar. While her greatest accomplishment was her family, her next love was art. She was a passionate sculptor and painter. She was a prominent fixture on the art scene in the North Shore and Merrimac Valley, showcasing her clay pieces at different events. She had a one-woman show of her paintings in Vienna, Austria, and a piece she showed at a competition in Florence, Italy won first prize. She also had a great love of music -- she loved to sing, play guitar, and listen to Italian opera. Pat was also an adventurous traveler. She hiked part of the Appalachian Trail in her 50s, went to China with her husband Tom, and visited Italy more than 20 times. As a young woman, she worked at the State House beside then-senator, John F. Kennedy. After raising her family, she went back to work as a calendar editor at the Danvers Herald for many years. During her life she had many hardships, including losing three of her children, but, nevertheless, she had an optimistic outlook and considered herself to be a lucky person. Pat always appreciated her life, even during the struggles. Her family is proud to have had her as a role model -- strong, loving, and inspiring -- and feels blessed to have had her in their lives. Her Funeral Mass will be celebrated at 9AM on Wednesday, May 8, 2019 in Saint Richard Church, 90 Forest St., Danvers. Burial will follow in Annunciation Cemetery. Visitation will be held on Tuesday, May 7, 2019 from 4-7PM at C.R. Lyons & Sons, Funeral Directors, 28 Elm St., Danvers. In lieu of flowers donations may be made to the Danvers People-to-People Food Pantry, PO Box 2076, Danvers, MA, 01923.

DANVERS- Patricia (Tomeo) McGinn died on Friday, May 3 (the same day her father passed away in 1982), surrounded by her family. She was the daughter of Michael and Katherine Tomeo. She was predeceased by her husband, Thomas P. McGinn, and her... View Obituary & Service Information

The family of Patricia McGinn created this Life Tributes page to make it easy to share your memories.

DANVERS- Patricia (Tomeo) McGinn died on Friday, May 3 (the same...