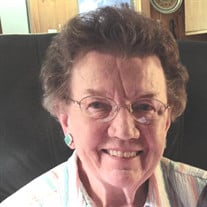 On Sunday, January 13, 2019, Patricia Ann Clapp, loving wife and mother, passed away peacefully in her sleep at the age of 86. Born Patricia Ann Long in Boston, MA to Charles H. Long and Elizabeth A. Ryan, Pat was preceded in death by her father and mother, sister Virginia M. Long and husband Roger C. Clapp. Pat is survived by daughter Susan DiBella and her husband Aaron of Danvers, MA, son Stephen Clapp and his wife Laura Schandelmeier of Brentwood, MD, and grandchildren Holly Rae of Los Angeles, CA, and, Chloe and Kaitlyn of Danvers. Pat grew up in Dorchester, MA and attended Matignon High School before entering Katherine Gibbs Secretarial School. She worked her first job as a teenager at the Boston Public Library, and after attending the Gibbs school, she worked as a Secretary for Kehoe Chrysler. Pat was an early avid skier and joined the Massa-Schussers Ski Club in the 1950’s, where she met many life-long friends including her husband, Roger Clapp whom she married in 1967. Together, they moved to Wellesley, MA where they raised Susan and Stephen. Pat was an active member of the House and Garden Club of Wellesley, serving as the organization’s President between 1992-1994. With her Garden Club, Pat spent many afternoons visiting senior residents of the Weston Road Housing and assisted them with assembling and decorating beautiful floral arrangements. Pat provided many years of community service through civic beautification projects and as a delivery driver for Meals on Wheels. While raising Susan and Stephen, Pat also cared for her father Charles, mother-in-law Jennie C. Clapp, and sister Virginia. With her husband, Pat built a second home in the White Mountains of New Hampshire, where they eventually retired and became avid golfers and skied well into their 70’s. With their friends from the Massa-Schussers Ski Club, Pat and Roger enjoyed traveling to many international ski destinations, sometimes bringing Susan and Stephen in tow. Through her travels, Pat always enjoyed coming home to the White Mountains and New England. Visiting hours will be held at C.R. Lyons & Sons Funeral Directors, 28 Elm St., Danvers, MA on Thursday, January 17 at 4:00-7:00pm. A funeral Mass will be held at Saint Mary of the Annunciation Church, 24 Conant St., Danvers, MA on Friday, January 18 at 9:00am. A private burial will follow in Medway, MA.

On Sunday, January 13, 2019, Patricia Ann Clapp, loving wife and mother, passed away peacefully in her sleep at the age of 86. Born Patricia Ann Long in Boston, MA to Charles H. Long and Elizabeth A. Ryan, Pat was preceded in death by her... View Obituary & Service Information

The family of Patricia A. Clapp created this Life Tributes page to make it easy to share your memories.