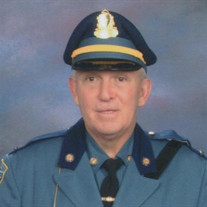 Massachusetts State Police Detective Lieutenant Norman C. Zuk, 62, died Friday morning, January 13, 2017 following a brief illness. Norman was a respected law enforcement officer with a reputation for loyalty and compassion, a world class athlete and lover of sports and a respected lifelong member of the community in Danvers and Essex County. Born in Danvers on March 16, 1954, he was the son of the late Peter and Geraldine (Tremblay) Zuk. He was a 1972 graduate of Danvers High School. He completed post-graduate studies at the Manlius-Pebble Hill School in Manlius N.Y. and attended the University of Rhode Island. He received his bachelor’s degree from Western New England College. Norman played four sports at Danvers High School and was Captain of the Football, Baseball and Hockey teams. He was a star player as a sophomore on the 1970 Massachusetts State Baseball Championship team and Most Valuable Player in Football in 1971. Norman was twice inducted into the Danvers Blue & White Hall of Fame both for his individual accomplishments as well as for his membership on the 1970 Baseball team. In 1982, Norman joined the Massachusetts State Police and was assigned to the Concord and Topsfield Barracks until 1985 when he was transferred to the detective division. After eleven years in investigations, he was promoted to Sergeant and was assigned to the Andover and Newbury Barracks, and then Logan Airport. He earned promotions to Lieutenant and later Detective Lieutenant. Since 2009, he had led the State Police unit assigned to the office of the Essex County District Attorney. Colonel Frank Hughes of the Massachusetts State Police stated: “Norm was a true professional and was respected by every Trooper who had the honor to work with him. There are countless families that have benefitted from his thirty-five years of hard work bringing justice to those victimized by crime. Norm exemplifies what a Trooper should be in the tradition of his father Peter and uncle Julian, who served in this organization before him. The Massachusetts State Police and the citizens of this state have truly lost a great man.” He leaves his loving son, Andrew Zuk and his wife Beth of Valencia, CA, two grandchildren, Joselle and Sophie Zuk; a sister, Marilyn Nugent and her husband John of South San Francisco, CA; two brothers, Peter Zuk and his wife Jodi of Andover, and Gregory Zuk of Deerfield Beach, FL; a niece, Elizabeth Tremblay Zuk, a nephew, Peter David Zuk, a loving extended family and many dedicated friends and colleagues. His Funeral Mass will be celebrated on Tuesday, January 17, 2017 at 9 AM in Saint Mary of the Annunciation Church, 24 Conant St., Danvers. Burial will follow in Walnut Grove Cemetery, Danvers. Relatives and friends are invited. Visiting hours are Monday from 4-8 PM in C.R. Lyons & Sons Funeral Directors, 28 Elm St., Danvers Square. Donations in his memory may be made to The Colleen Ritzer Memorial Foundation, 175 Andover St., Danvers, MA, 01923; www.colleenritzerscholarship.com.

The family of Norman C. Zuk created this Life Tributes page to make it easy to share your memories.