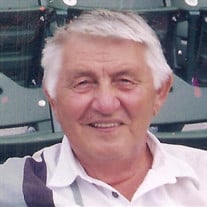 Norman V. Rydgren, 83, died Tuesday, May 19, 2015 at the Soldiers’ Home in Chelsea following a lengthy illness. He was the loving husband of the late Maryanne (Shepherd) Rydgren, with whom he shared forty-six years of marriage. Born in Lynn on March 7, 1932, he was the son of the late John and Evelyn (Gran) Rydgren, he was raised and educated in Lynn and was a graduate of Lynn Classical High School and attended Northeastern University. He served honorably in the U.S. Air Force during the Korean War. Norman had been employed as a senior aircraft designer at the General Electric Riverworks plant in Lynn until the time of his retirement. A longtime Danvers resident, he was a past president of both the Danvers Touchdown Club and the Danvers Jaycees. He also volunteered his time as a member of the Danvers Conservation Commission and was a founder of Danvers Girls Softball. He was a member of the former Calvary Episcopal Church and had been active in the Masonic Community. He leaves three daughters, Erika Rackliffe and her husband Brian of Seabrook, NH, Lauren Cummings and her husband Robert of Danvers, and Kristin Rydgren of Lynn, his grandchildren, Aliyah, Alexandra, Alicia, James, Rebecca, Braeden, Torin, and Kristian, his great-grandchildren, Sateira, Madison, and Tyler, his sister, Nancy Baldwin of Peabody, his brother-in-law, William Shepherd and his wife Marlene of Florida, and several nieces and nephews. He was predeceased by a brother, Dana Rydgren. His Funeral Service will be held on Saturday, May 23, 2015 at 11AM in C.R. Lyons & Sons Funeral Directors, 28 Elm St., Danvers Square. Burial will follow in Wadsworth Cemetery, Summer St., Danvers. Relatives and friends are invited. Visiting hours will be Friday from 4-7PM in the funeral home. In lieu of flowers, donations in his memory may be made to the Alzheimer’s Association, 480 Pleasant St., Watertown, MA 02472 or the Shriners Hospital for Children, 51 Blossom St., Boston, MA 02114.

Norman V. Rydgren, 83, died Tuesday, May 19, 2015 at the Soldiers&#8217; Home in Chelsea following a lengthy illness. He was the loving husband of the late Maryanne (Shepherd) Rydgren, with whom he shared forty-six years of marriage. Born in... View Obituary & Service Information

The family of Norman V. Rydgren created this Life Tributes page to make it easy to share your memories.