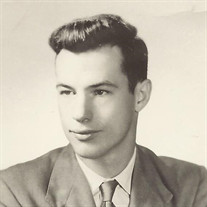 DANVERS- Norman J. Brown recently passed away following a two year battle with Non-Hodgkins Lymphoma. Norm was born in January of 1928. On that day, he along with his twin sister Norma (York) Brown joined his parents, James and Nora (O’Callaghan) Brown and his older brother George Brown. They resided first in Ipswich MA eventually settling in Hamilton MA. Norm graduated with the Class of 1945 from Ipswich High School. Following High School, he enlisted in the US Navy stationed at Quonset Point, R.I. serving as an Aviation Electronic Technician operating airborne radar systems. Following his service in the Navy, Norm attended Northeastern University where he earned a BSEE in 1953, followed by an MSEE focused on RF Engineering in 1957. During his quest for higher education, he met and married the love of his life Dolores (LeClair) Brown, on June 7, 1953. In 1953 Norm began his career at Varian in Beverly, MA as a Microwave Engineer. In 1957 he joined M/A-COM in Burlington, MA assuming the role of Engineering Manager. By 1971 he was a co-founder and VP of Engineering at Micro-Dynamics Inc., in Woburn, MA. In 1981 he returned to MA-COM first as an Engineering Manager specializing in Radar & Electronic Countermeasures, eventually finishing his career at M/A-COM as Director of Marketing for RF Sub-Systems where he retired in 1992. His work at Micro-Dynamics and M/A-COM allowed Norm to travel the US extensively, while affording the opportunity to travel to many countries in Europe, including the UK, France, Germany, and Israel. Norm was also invited to present technical briefs to microwave engineering groups in Asia, traveling to Taiwan and Japan during his career. He was a life time member of the IEEE Engineering Society, publishing many technical articles for IEEE related to his work in RF Engineering on a number of different topics. For the past ten years, Norm and Dolores have enjoyed living in Danvers with their daughter, Maureen and her husband, Jack Gillis, providing the opportunity to spend lots of quality time with his family. An avid fan of the Patriots, the Red Sox, and the Celtics, Norm enjoyed; debating politics and current events; the Danvers YMCA and Senior Center; watching his grandchildren and great grandchildren in all their activities; the breakfast groups at the Danvers Panera and the Custom Cup Coffee Shop. He also enjoyed the Danvers Library where he read and enjoy many volumes of books based mostly on science and mathematics. As a result of his interest in mathematics, Norm also published over a dozen articles in “Technical Analysis of Stocks & Commodities”, a national magazine illustrating advanced methods of trading in the stock market. Norm wanted to recognize the great care he received from the oncology team supporting him from Lahey Medical in Burlington MA and Peabody MA, in particular the care and support he received from Dr. Cossor, his oncologist who treated his rare form of Non-Hodgkins Lymphoma. He appreciated her professionalism, guidance and consideration during his battle with NHL. Dr. Cossor formed a unique friendship with Norm, and left an indelible mark on all of us who came to know her during this challenging time in his life. He wanted her to know the true depth of his appreciation for her efforts on his behalf. Norm is pre-deceased by his father and mother, James and Nora (O’Callaghan) Brown of Ipswich and Hamilton MA, his brother George and his wife Elenor (Sullivan) Brown of Newburyport MA, his brother-in-law Myron York of Beverly MA, and his mother-in-law Jeannette (Cormier) Richards. He is survived by his wife Dolores (LeClair) Brown, her brother Henry LeClair of Missouri, his sister Norma (Brown) York and longtime friends Bob Kinney of Beverly MA, daughter Maureen (Brown) Gillis and her husband Jack Gillis, their daughter Amy (Gillis) Emery and her husband Steve Emery of Danvers, his great granddaughters Caitlin and Molly Emery, his son Thomas Brown and his wife Lisa (Cronin) Brown of Wenham MA, and his granddaughters Olivia Brown and Vanessa Brown, along with many other nieces, nephews, and close friends too numerous to include here. Visitation will be held from 4-7PM on Friday, October 7, 2016 at C.R. Lyons & Sons, Funeral Directors, 28 Elm St., Danvers. All other funeral services will be held privately. In lieu of flowers, please make donations in Norman’s memory to The Kaplan Family Hospice House, 78 Liberty St., Danvers, MA, 01923. www.caredimensions.org/hospice-care/kaplan-house.cfm.

DANVERS- Norman J. Brown recently passed away following a two year battle with Non-Hodgkins Lymphoma. Norm was born in January of 1928. On that day, he along with his twin sister Norma (York) Brown joined his parents, James and Nora (O&#8217;Callaghan)... View Obituary & Service Information

The family of Norman J. Brown created this Life Tributes page to make it easy to share your memories.