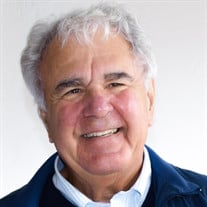 Our family sadly has lost a pillar of strength and love. Nicholas A. Scangas passed away on Tuesday, October 13, 2020 after a short battle with cancer. He was a devoted husband to Trudy Myhre with whom he shared 52 years of blissful marriage. Nick, as he was fondly known, was born in Peabody, MA and was the son of Angelo and Katherine Scangas of Lynn. He attended Worcester Academy, class of 1961, then went on to graduate from New York University in 1967, as a business major. At NYU he was a member of Alpha Kappa Psi. He also met Trudy there. Upon graduation, Nick served in the Coast Guard Reserve from 1967 to 1972. Nick grew up in the dairy industry, starting at the age of 10, and went on to run West Lynn Creamery and the Richdale Convenience Stores, with his cousin Arthur Pappathanasi and brother Christopher Scangas, for 35 years. As one of the largest private employers in the region, they supported many local charities. With his knowledge and desire to help the community, he became the Chairman of the Boards of The Community Credit Union of Lynn (started by the Scangas & Demakes families in 1955 to help the local Greek population), the New England Milk Dealers Association, and the National Independent Milk Dealers Association. Nick also applied his expertise in the dairy industry at several national organizations in Washington, D.C. serving as the Director of the Milk Industry Foundation and of the International Dairy Food Association. After the sale of West Lynn Creamery, Nick discovered his passion for commercial real estate. He was a partner in the Clocktower Properties and the Development of the Breakwater Apartment project in Lynn. Nick was also a member corporator of the Lynn Hospital and Union Hospital. He enjoyed golf and was a member at Tedesco Country Club where he spent many days with his friends. Nick was a special person, who made people feel at ease whenever he was around. He was kind, honest, and fair, and had a positive impact on all who came into contact with him. Nick loved his family with all of his heart, and beamed with pride when he was around them. But Nick’s greatest love was being in Maui, Hawaii with his wife. Nick and Trudy spent over 20 winters there, and quickly became a part of the kamaaina community. They made Hawaii their home away from home and were surrounded by wonderful friends who are very dear to their hearts. In addition to Trudy, he is survived by his loving daughters Heather Schatz and her husband Edward of Wenham, MA and their two children Gwen and Brooke and his other daughter Rebecca Scangas-Verma and her husband Aditya of Westfield, NJ and their two children Melina “Milla” and Shylah. He is also survived by his siblings, Christopher Scangas of California, Pamela Scangas of Middleton, MA, Patricia Scangas of Lynn, MA and Arthur Scangas of California. He will live on in the hearts and minds of everyone he interacted with. A memorial gathering will be held at a later date. If desired, friends may make a memorial contribution to Nick’s favorite charities: Doctors Without Borders doctorswithoutborders.org and Planned Parenthood plannedparenthood.org.

Our family sadly has lost a pillar of strength and love. Nicholas A. Scangas passed away on Tuesday, October 13, 2020 after a short battle with cancer. He was a devoted husband to Trudy Myhre with whom he shared 52 years of blissful marriage. Nick,... View Obituary & Service Information

The family of Nicholas A. Scangas created this Life Tributes page to make it easy to share your memories.

Our family sadly has lost a pillar of strength and love.