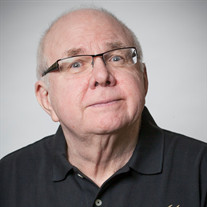 Neil Grant MacKenzie, 73, a lifelong Springfield resident, died Thursday morning, December 5, 2019 at Baystate Medical Center in Springfield following a lengthy illness. Born in Springfield on December 7, 1945, he was the son of the late Angus and Irma (Spear) MacKenzie. He was a graduate of Springfield Technical High School and American International College. Neil worked alongside his parents in his family’s business, MacKenzie Vault, Inc., manufacturing cremation urns. He owned and operated the business for thirty years, proudly working alongside his son until his retirement. He was a member of the Valley Athletic Club at the Springfield YMCA where he loved playing racquetball and tennis. He leaves his loving and devoted son, Scott Wallingford MacKenzie and his husband Timothy of Longmeadow, his grandson, Maxton MacKenzie, his brother, Bruce MacKenzie and his wife Louise of Santa Barbara, CA, his former wife, Barbara MacKenzie-Rodgers and her husband Robert of East Longmeadow, and several nieces and nephews. Neil’s family will receive friends and family on Tuesday, December 10, 2019 from 5PM-6:45PM in C.R. Lyons & Sons Funeral Directors, 28 Elm St., Danvers. A funeral service will follow at 7PM. Family and friends are also welcome at a memorial service and reception honoring Neil on Wednesday, December 11, 2019 at 5:30PM at The Student Prince Restaurant, 8 Fort St., Springfield. Donations in Neil’s memory may be made to the Alzheimer’s Association, 309 Waverley Oaks Rd., Waltham, MA 02452.

The family of Neil G. MacKenzie created this Life Tributes page to make it easy to share your memories.