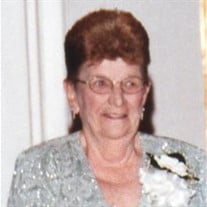 BEVERLY- Nancy J. (Skinner) Gourdeau, 81, passed away on January 8, 2019 in Beverly Hospital surrounded by her family, following a lengthy illness. She was the loving wife of the late Wilfred Gourdeau. Born in Boston of May 17, 1937, she was the daughter of the late Frank and Nancy (Bangs) Skinner. She was raised and educated in Danvers and graduated from Holten High School in 1955. She had been a receptionist for Dr. Kowalski in Beverly for many years. Nancy enjoyed crafts and was exceptional at knitting and crocheting. She also loved music and dancing. Nancy and Wilfred enjoyed winters in their home in West Palm Beach, FL. She especially enjoyed spending time with her family. She is survived by five children, Glenn and Carolyn Gourdeau of Beverly, Deborah and William Marcos of Alaska, Mark Gourdeau of Lowell, Judith Gourdeau of CT and Donna and Michael Loiacano of Beverly, thirteen grandchildren, Teisha and Rachael Babineau, Michelle Castiello, Julie and Jamie Block, Jake, Nicholas and Alex Marcos, Jack, Samuel and Eva Gourdeau and Sophia and Christopher Loiacano, five great grandchildren, Susannah, Salvatore, Angelo, Taylen and Alex, her beloved Gourdeau family, friends and neighbors. She was predeceased by her daughter, Susan Babineau and her aunt, Dot Skinner. Her Funeral Service will be celebrated at 11AM on Wednesday, January 16, 2019 at C.R. Lyons & Sons, Funeral Directors, 28 Elm St., Danvers. Burial will follow in Walnut Grove Cemetery, Danvers. Visitation will be held from 4-7PM on Tuesday, January 15, 2019 in the funeral home. In lieu of flowers donations in Nancy’s name may be made to St. Jude Children’s Research Hospital, 501 St Jude Pl, Memphis, TN, 38105.

BEVERLY- Nancy J. (Skinner) Gourdeau, 81, passed away on January 8, 2019 in Beverly Hospital surrounded by her family, following a lengthy illness. She was the loving wife of the late Wilfred Gourdeau. Born in Boston of May 17, 1937, she... View Obituary & Service Information

The family of Nancy Jean Gourdeau created this Life Tributes page to make it easy to share your memories.