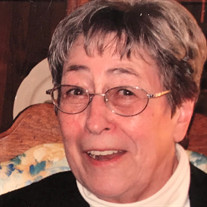 Nancy A. (Crosby) (Deminski) Burke, 83, died Monday, Oct. 22, 2018 at Brigham & Women’s Hospital. She was the loving wife of Donald F. Burke of Danvers and the late John S. Deminski who predeceased her in 1978. Born in Salem on Dec. 7, 1934, she was the daughter of the late John and Mae (Cottle) Crosby. She was raised and educated in Beverly and was a graduate of Beverly High School. A longtime Danvers resident, Nancy was an avid bowler and enjoyed quilting. She was a loving and dedicated mother and grandmother who was famous for her words of wisdom and quick wit. In addition to her husband, she leaves her children, John Deminski of Salem, NH, Jill McKeen and her husband Scott of Middleton, Jane Cella of North Reading and her companion Bob Hayden, Jay Deminski of Middleton, R. Scott Burke and his wife Joyce of Middleton, Dana Burke and his wife Candy of Middleton, and Debra Burke of Beverly, fourteen grandchildren, six great-grandchildren, three siblings, Joanne King of Peabody, Brian Crosby of Beverly, and Pamela Landry of NH, and many nieces and nephews. She was predeceased by a son, James Deminski, and her brothers John, Gary, and Richard Crosby. A celebration of Nancy’s life will be held privately. In lieu of flowers, donations in her name may be made to the American Heart Association, PO Box 417005 Boston, MA 02241.

The family of Nancy A. Burke created this Life Tributes page to make it easy to share your memories.