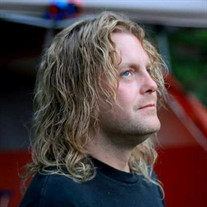 Myron Dubina, Jr., 47, passed away September 28, 2017, in Danvers, MA. Myron was born in Malden, lived in Wilmington, and worked as self-employed carpenter, in which he took pleasure in problem-solving, craftsmanship, and helping others. Raised in Boxford, Myron was an avid learner who excelled in science and mathematics and went on to study chemical engineering, forestry, art, and conservation. He was a life-long appreciator of the outdoors and enjoyed camping, canoeing, trekking, climbing trees, baseball and basketball. While a quiet listener, Myron was an accomplished musician, singer, songwriter and audio engineer. Among his many other interests he enjoyed cooking, drawing, Wiffleball, pool, live music, travel, time with his cat Julius and, in particular, the company of his beloved family and friends. Myron liked talking shop and fishing with his father, sharing recipes and stories with his mother, and he was mentor, council, and best friend to both of his younger brothers. Myron was an imaginative, intellectual person with a meticulous nature, quick wit and seemingly unlimited skills. He emanated strength, steadiness, and sanctuary, unassuming in nature yet profound in thought, slow in storytelling and quick to smile, rich in clever and silly observations. He was a loyal and trustworthy man, kind to animals and beloved by children who saw him as both their playmate and protector. To know Myron was to know a truly kind-hearted and altruistic soul, always first to help, to advise, to give, and to forgive. Myron is survived by his loving parents, Myron Dubina, Sr. and Diane Dubina of Georgetown; brothers and sisters-in-law, Brian and Heather Dubina of Haverhill and Philip and Meg Dubina of Hamilton; cousins, Amy Swoboda and Anne Wagner, Tiffany Goldberg, and Garrett, Branscombe, and Arianne Dubina; brother-at-heart, Michael Barry. He also leaves a large, widespread family of loving friends across the country. Relatives and friends are respectfully invited to attend visiting hours on Wednesday, October 4, 2017, from 5-8 p.m. at C.R. Lyons & Sons Funeral Directors, 28 Elm Street, Danvers. Kindly omit flowers. In lieu of flowers, we ask that you contribute to Dana Farber Boston Children’s Hospital, the Kaplan Family Hospice House, the Arbor Day Foundation, or what you think Myron might like.

Myron Dubina, Jr., 47, passed away September 28, 2017, in Danvers, MA. Myron was born in Malden, lived in Wilmington, and worked as self-employed carpenter, in which he took pleasure in problem-solving, craftsmanship, and helping others. Raised... View Obituary & Service Information

The family of Myron P. Dubina Jr. created this Life Tributes page to make it easy to share your memories.