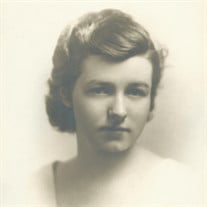 Miriam C. (Lyons) Tremblay, 99, fondly known to all as Marty, passed away peacefully at Acadamy Manor in Andover, on Thursday, December 10, 2015, after spending the afternoon with her family. Miriam was born at the family home on Oak Street in Danvers on July 19, 1916 to Clarence R. and Alice F. (Spears) Lyons. She was raised and educated in Danvers, attending the Maple Street School, and then Holten High School, graduating in 1933. She pursued a degree in Education, graduating from Salem State in 1938. Known to her students as Mrs. Tremblay, she taught 5th grade for many years in Danvers, Marblehead, and Beverly, retiring in 1972. She had a passion for teaching, and was referred to as "My Favorite Teacher” by many any of her students. After retiring from teaching, she was a beloved babysitter to several Danvers families. Marty loved to read, she loved watching old movies, Lawrence Welk, and a good game of Bingo. But most of all, she loved her granddaughters, spending time with her family, and holidays with the extended Powers family. She was a member of our Lady's Sodality Court Henry A. Sullivan, The Catholic Daughters of America, The Danvers Historical Society and The Mass Teachers Retirement Association. She is survived by her daughter and son in law, Betsy and Tom Powers of North Andover, three granddaughters Kate Lindsey and her husband Chris, Brenna and her husband Eric Narcisi, and Ellen Powers and her fiancé, Chris Pendleton, and great granddaughter, Quinn. She was pre-deceased by all five of her siblings, sisters Kathryn Rivers and Evelyn Lyons, and brothers Albert, William and Clarence Lyons Jr. Her family would like thank all her neighbors and staff at Ferncroft Tower for the friendship that they showed Marty over the years. They would also like to thank the staff of Haverhill Crossing, Acadamy Manor and Choice Hospice for their care and compassion. Her Funeral Mass will be celebrated on Tuesday, December 15, 2015 at 11AM in Saint Mary of the Annunciation Church, 24 Conant St., Danvers. Burial will follow in Saint Mary Cemetery, Sylvan St., Danvers. Visitation will be Tuesday morning prior to the mass from 9:30-10:45AM in C.R. Lyons & Sons Funeral Directors, 28 Elm St., Danvers Square. In lieu of flowers, donations may be made in Miriam’s name to the Danvers People-to-People Food Pantry, PO Box 2076, Danvers, MA 01923.

Miriam C. (Lyons) Tremblay, 99, fondly known to all as Marty, passed away peacefully at Acadamy Manor in Andover, on Thursday, December 10, 2015, after spending the afternoon with her family. Miriam was born at the family home on Oak Street... View Obituary & Service Information

The family of Miriam C. Tremblay created this Life Tributes page to make it easy to share your memories.