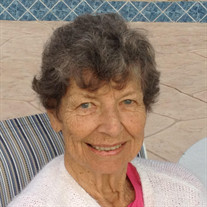 Miriam E. “Dolly” Snow, 91, of Bonita Springs, FL passed away Tuesday, October 31, 2017 at Joanne’s House at Hope Hospice. She had been a winter resident of Bonita Springs for many years before moving from Ohio to make it her permanent home in 1995. Miriam was born September 24, 1926 in Danvers, MA a daughter of the late G. Willis and M. Edna (Meade) Lee. Miriam graduated from Holten High School, class of 1944. As a young woman she worked for the AC Lawrence Company in Peabody. She married her high school sweetheart Jack and was a devoted wife and mother to their four children. She enjoyed hosting family and friends at their lake house and beach condo. She enjoyed square dancing, music and was a member of Sweet Adelines. Most important to Miriam was the times she shared with her family, especially her grandchildren and great-grandchildren. Miriam is survived by her children, John Snow and his wife Barbara of Palmyra, VA, Jeff Snow and his wife Merrie Jo of Fort Myers Beach, FL, Nancy Thornburg and her husband Tony Fortunato of Bonita Springs, FL, and Alan Snow of Boston; 14 grandchildren; 16 great-grandchildren; and a daughter-in-law, Donna Ryan-Snow. In addition to her parents, she was preceded in death by her husband of 58 years, John R. “Jack” Snow in 2005; and by her three brothers, whom all passed away as young men, Edwin, Arthur & Wilbur Lee, and her sisters Alice Maloney and Margery Scott. Also predeceasing her was her son-in-law Thomas Thornburg. Her Funeral Service will be Saturday, November 11, 2017 at Noon in Holy Trinity United Methodist Church, 16 Sylvan St., Danvers. Visitation will be held prior to the service from 11AM-12PM in the church. Burial will follow in Wadsworth Cemetery, Summer Street, Danvers. Relatives and friends are invited. In lieu of flowers, donations in Miriam’s name may be made to the Wounded Warriors, https://support.woundedwarriorproject.org, First Presbyterian Church of Bonita Springs, www.fpcbonita.org or Holy Trinity United Methodist Church, 16 Sylvan St., Danvers, MA 01923.

The family of Miriam E. Snow created this Life Tributes page to make it easy to share your memories.