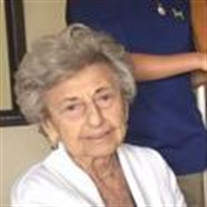 Mildred (Kappotis) Baltoumas, 95, died peacefully on Saturday evening, August 18, 2018, at the Rosewood Nursing & Rehab. Center in Peabody. She was the loving wife of the late William Baltoumas, with whom she shared sixty-five years of marriage. Born in Middleton on December 24, 1922, she was the daughter of the late Constantine and Chrisoula (Theothedoplos) Kappotis. She was raised and educated in Middleton and Peabody and was a graduate of Peabody High School. Mildred was employed for many years at Shop & Shop in Peabody until the time of her retirement. A longtime Peabody resident, she was a member of Saint Vasilios Greek Orthodox Church and the Daughters of Penelope. She enjoyed traveling with her late husband and babysitting her grandchildren. She leaves a son, George and his wife Janice Baltoumas of Salem, and a daughter, Gail and her husband Robert Wheeler of Danvers, her grandchildren, Stacy and her husband Sean Dunn, Jodi and her husband Peter Fish, Jessica and her husband Daniel Perry and Melissa and her husband Michael Giacobbe, ten great-grandchildren, Brittany, Emma, Caitlyn, Bobby, Aidan, Thomas, Zachary, Abigail, Ava, and Aubrey, her siblings, Peter “Cappy” Kappotis, Angie Eftim, and Ernest Kappotis, and many nieces and nephews. She was predeceased by her siblings Anne Tsouris, Joan Fedas, and George Kappotis. Her Funeral Service will be Friday, August 24, 2018 at 10AM in C.R. Lyons & Sons Funeral Directors, 28 Elm St., Danvers. Burial will follow in Oakdale Cemetery, Middleton. Relatives and friends are invited. Visiting hours are Thursday from 5-8PM in the funeral home. In lieu of flowers, donations may be made to the Rosewood Nursing & Rehab Resident Activity Fund, 22 Johnson St., Peabody, MA 01960. www.LyonsFuneral.com.

Mildred (Kappotis) Baltoumas, 95, died peacefully on Saturday evening, August 18, 2018, at the Rosewood Nursing & Rehab. Center in Peabody. She was the loving wife of the late William Baltoumas, with whom she shared sixty-five years of marriage. Born... View Obituary & Service Information

The family of Mildred Baltoumas created this Life Tributes page to make it easy to share your memories.