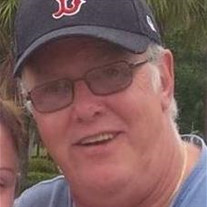 Bertrand Michael “Mike” Dixon, 61, of Peabody, formerly of Danvers and Lowell, died Saturday, January 9, 2016 at the Kaplan Family Hospice House. He was the husband of Karen R. (Nadreau) Dixon, with whom he shared 23 years of marriage. Born in Lowell on January 15, 1954, he was the son of the late Robert E., Sr. and Gladys (Birchall) Dixon. He was raised and educated in Lowell and made his home there until 1995. Beloved by colleagues, Mike was employed by Medtronic in Danvers as a supervisor with the heart catheter export division for the last ten years. He began his career in manufacturing with General Electric, Wire and Cable Division where he worked his way up to plant manager and had held various management positions with other companies. A great NASCAR fan, he also loved the Red Sox and Patriots. He was devoted to his children and grandchildren, spending time with family and friends and traveling were his favorite things. In addition to his wife, he leaves his children, Joshua Parent and his wife Michelle of Pelham, NH, Jeremiah Parent of Methuen, James Dixon and his partner Jessica Rogers of Augusta, ME, Jessica Parent and her partner Miguel Velez of Ocala, FL, Ashleigh Gillespie of Sandown, NH, and Rebecca Waddle and her husband Aaron of Royal Palm Beach, FL, his grandchildren, Justin, Dillon, Alex, Kayla, Trinity, Adam, Siarra, Kamden, Maddux, Rylan, Bradyn, Skylar, Kaleb, Corbin, Lucas, Griffin, Avery, Jackson, and Colton. He was eagerly awaiting the births of two additional grandchildren in the coming months. He also leaves his siblings Robert Dixon, Jr. of New Mexico, Alice Quinlan and her husband Garrett of Pepperell, Mary Rosenquist of Dracut, Bernadette Blake and her husband Clifford of Lowell, and Christopher Dixon and his wife Christine of NH, and many nieces and nephews. He was predeceased by a son, Jason Dixon. His Funeral Service will be held on Friday, January 15, 2016 at 11AM in C.R. Lyons & Sons Funeral Directors, 28 Elm St., Danvers Square. Relatives and friends are invited. Visiting hours are Thursday in the funeral home from 5-8PM. In lieu of flowers, donations may be made to the American Cancer Society, 30 Speen St., Framingham, MA 01701 or the American Heart Association, 300 5th Ave, Waltham, MA 02451.

Bertrand Michael &#8220;Mike&#8221; Dixon, 61, of Peabody, formerly of Danvers and Lowell, died Saturday, January 9, 2016 at the Kaplan Family Hospice House. He was the husband of Karen R. (Nadreau) Dixon, with whom he shared 23 years of marriage. Born... View Obituary & Service Information

The family of Mike Dixon created this Life Tributes page to make it easy to share your memories.