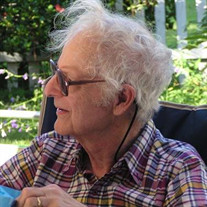 Michael Schiff, M.D., 84, died early Wednesday morning, June 24, 2015 at his home in Topsfield surrounded by his loving family. He was the husband of Barbara (Chick) Schiff, with whom he shared sixty years of marriage. Born in New York City on May 15, 1931, he was the son of the late Arthur and Dorothy (Olevson) Schiff. He was raised and educated mostly in Pawtucket, RI, and was a graduate of Hope High School. He went on to earn his undergraduate degree from Yale University and his medical degree from Boston University before completing his residency at Mary Hitchcock Hospital in New Hampshire. Dr. Schiff served in the Air-force, completing his medical internship at Tripler army Hospital in Honolulu, Hawaii. His younger son was born on that island, where the family shared several happy years. Dr. Schiff then had a private dermatology practice in Lawrence before practicing in Danvers and Hampton, NH for more than forty years. He was a member of the Massachusetts Dermatology Association. A Topsfield resident for 48 years, he was a member of Trinity Episcopal Church. Mike adored his pets. Veterinarian school appealed to him as an alternate career choice (that or rotor rooter man!) Mike had a wonderful, dry sense of humor. He was a humble, kind man. Mike never liked to brag about his many accomplishments, preferring to concentrate on taking care of his family. A gifted photographer, Mike's beautiful photos of his wife and children line rooms of the Topsfield home. In addition to his wife, he leaves two sons, Mark Schiff and his wife, Mara of Rutland, VT, and Erik Schiff and his partner, Ranee Duncan of Westborough, a daughter, Kristin Cotton and her partner, Peter Binette of Amesbury. a grandson, Adam Michael Schiff and his partner DeAnna Bowie of Auburn, Maine, and two nieces, Julie Allen of Lititz, Pennsylvania, and Beth Campbell of Nashville, Tennessee, and their families. He was predeceased by a sister, Nancy Barnett. The Schiff family is extremely grateful for the exceptional care Mike received during his illness, especially the compassion and attention he received from Lahey Health at Home and the Topsfield Police and Fire Departments. A celebration of Mike’s life will be announced later in the year. In lieu of flowers, donations may be made to the Topsfield Firefighters Relief association, P.O. Box 15, Topsfield, Massachusetts 01983, North American Shar-Pei Rescue, 2203 Walnut Grove Lane, Richmond, Texas, 77406, or the Michael J. Fox Association For Parkinson's Research, P.O. Box 5014, Hagerstown, MD, 21741-5014.

Michael Schiff, M.D., 84, died early Wednesday morning, June 24, 2015 at his home in Topsfield surrounded by his loving family. He was the husband of Barbara (Chick) Schiff, with whom he shared sixty years of marriage. Born in New York... View Obituary & Service Information

The family of Dr. Michael Schiff created this Life Tributes page to make it easy to share your memories.