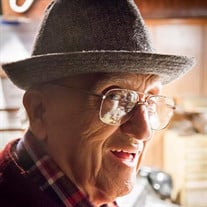 Michael Listro, 96, died Saturday evening, April 18, 2015 in the Kaplan Family Hospice House. He was the loving husband of Angelina (Cantonuso) Listro, with whom he shared 77 years of marriage. Born in Chelsea on April 24, 1918, he was the son of the late Emanuel and Carmella (Addonizio) Listro. He was raised and educated in Chelsea and Revere and was a longtime Danvers resident. Mr. Listro had been employed as a supervisor at Snow Crest Foods in Salem. He also worked as an antique dealer for many years. An accomplished mixed media artist, he self-published a book of his art titled “Inspiration.” Proud of his born-again Christian faith, he was a member of the First Assembly of God in Beverly. He was thoughtful and generous, always willing to donate to a worthy cause. He was a devoted husband who loved his family. He leaves three children, Emanuel Listro and his spouse Nancy Kennedy of New Hampshire, Josephine Pommet and her husband Dana of Florida, and Michael LIstro and his fiancée Laura Towey of Danvers, his grandchildren, Lisa Pelonzi and her husband Michael of Danvers, Lauren Rothwell and her husband Matthew of New Hampshire, Christopher Listro and his wife Ruth of Newburyport, Christopher Listro of Beverly, and Andrea O’Brien and her husband Julian of Beverly, and eight great-grandchildren. He was predeceased by two daughters-in-law, Barbara and Elizabeth Listro, and his sister and brother-in-law, Clara and Jerry Greco. Visiting hours are Sat., April 25, 2015 from 2-5PM in C.R. Lyons & Sons Funeral Directors, 28 Elm St., Danvers Square. Relatives and friends are invited. In lieu of flowers, donations in his memory may be made to https://my.charitywater.org/michael-listro-water-is-life to support clean water in developing communities around the world.

Michael Listro, 96, died Saturday evening, April 18, 2015 in the Kaplan Family Hospice House. He was the loving husband of Angelina (Cantonuso) Listro, with whom he shared 77 years of marriage. Born in Chelsea on April 24, 1918, he was the... View Obituary & Service Information

The family of Michael Listro created this Life Tributes page to make it easy to share your memories.