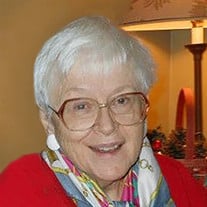 DANVERS-Mary Louise (Eberling)(Verry) Currie, 83, passed away peacefully on Friday, January 12, 2018 surrounded by her loving family. Born on June 20, 1934 to the late John F. and Frances (Mullen) Eberling, she was a life-long resident of the town of Danvers. Mary was a 1952 graduate of Holten High School in Danvers. She later trained in radiology at Salem Hospital. Most of her career was spent working in the offices of Dr. Ronald Goldberg and Dr. Joel Saks as a radiologic technician. Mary considered the raising of her three boys as the biggest accomplishment in her life. She was the devoted wife of 26 years to Edgar E. Verry, who passed away in 1981. Mary was the loving mother to her three sons and their spouses, David Verry and his wife Cathy of Beverly; Mark Verry and his wife Mary Beth of Danvers; and Scott Verry and his wife Melissa of Lowell. She is also survived by her grandchildren: Caitlyn and her husband Anthony Gaglione; Jonathan, Nathan, Daniel and Matthew Verry, Christopher and Zachary Aguiar and Stephanie Verry. Mary is also survived by her great-grandchildren, Benjamin, Ryan and Joseph Gaglione, and Myla Mae Verry. Mary was also predeceased by her second husband Charles S. Currie in 2012. During her 26 years of marriage to Charles, Mary assisted in the ownership of Black Eagle Books and spent many winters in Ft. Myers, Florida. She is survived by his children and granddaughters Cailin, Kirsten and Cierra. The Verry family would like to thank Oceanview Assisted Living and the Masconomet Healthcare Center for their caring of Mary in her later years. Her Funeral Mass will be celebrated at 9AM on Wednesday, January 17, 2018 in Saint Richard Church, 90 Forest St., Danvers. Burial will follow in Saint Mary Cemetery, Sylvan St., Danvers. Visiting hours will be held on Tuesday from 4-7PM at C.R. Lyons & Sons, Funeral Directors, 28 Elm St., Danvers.

DANVERS-Mary Louise (Eberling)(Verry) Currie, 83, passed away peacefully on Friday, January 12, 2018 surrounded by her loving family. Born on June 20, 1934 to the late John F. and Frances (Mullen) Eberling, she was a life-long resident of... View Obituary & Service Information

The family of Mary L. (Verry) Currie created this Life Tributes page to make it easy to share your memories.