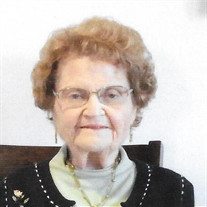 DANVERS/BEVERLY- Mary E. (Wells) DeLuca, 87, passed away on December 18, 2016 with her family by her side. She was the wife of the late R. Carmen Deluca with whom she shared 45 years of marriage. Born in Peabody on December 18, 1929, she was the daughter of the late Charles Wells and Della (Kehoe) Wells Crosby and stepdaughter of the late J. Keith Crosby. Mary graduated from the former Saint Chretienne Academy of Salem and the New England Conservatory of Music in Boston. She sang locally for many years in the Saint Mary of the Annunciation Choir as well as many other churches on the North Shore. Mary also sang for weddings and other functions in the North Shore area. She had been employed at Hamblett & Hayes Co., Beverly Hospital, Danvers State Hospital, Salem Five Bank and Cherry Street Fish Market. She belonged to several clubs, including Bridge Club, Les Girles and Saint Chretienne Academy Friends. Along with her late husband, she loved being part of their grandchildren’s school and sport activities. Her great grandchildren were very special to her; having been lucky to enjoy them during her lifetime. Mary also enjoyed spending time at camp in Freedom, NH with family and friends. Mary is survived by her two daughters and son-in-law, Deborah A. Standley and Kathleen M. and Darryl Parker, all of Danvers, she was Grammie to seven grandchildren, Shannon, Kristin and Janelle Parker, Jeffrey and Heather Standley, Jennifer Thewes and Kimberly LaValley, she was Memere to seven great grandchildren, Livia and Chloe Thewes, Christopher, Zachery and Domanik LaValley and Destiny and Annika Standley, and aunt to many nieces and nephews. She was predeceased by her son Philip C. DeLuca and her brother, John A. Wells, Sr. Her Funeral Mass will be celebrated at 9AM on Tuesday, December 27, 2016 in Saint Mary of the Annunciation Church, 24 Conant St., Danvers. Burial will follow in Annunciation Cemetery, Danvers. Visitation will be held Monday from 4-7PM at C.R. Lyons & Sons Funeral Directors, 28 Elm St., Danvers. In lieu of flowers, expressions of sympathy may be made in Mary’s name to the Kaplan Family Hospice House, 78 Liberty St, Danvers, MA, 01923 or Danvers People-to-People Food Pantry, PO Box 2076, Danvers, MA, 01923.

DANVERS/BEVERLY- Mary E. (Wells) DeLuca, 87, passed away on December 18, 2016 with her family by her side. She was the wife of the late R. Carmen Deluca with whom she shared 45 years of marriage. Born in Peabody on December 18, 1929, she... View Obituary & Service Information

The family of Mary E. DeLuca created this Life Tributes page to make it easy to share your memories.