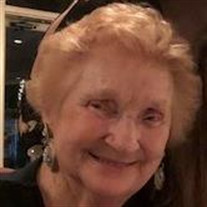 HOLLY HILL, FL – formerly of Marblehead, Mary Ann “Maureen” (O’Brien) Kennedy, 85, died on Friday July 26, 2019 in Holly Hill, Florida. She was the loving wife of the late Maurice “Bud” Kennedy. She was born on July 22, 1934 in Mount Bellew, County Galway, Ireland. Maureen and Bud had been residents of the North Shore and lived in Marblehead for 25 years prior to moving to Florida. She was an avid golf and bridge player at Tedesco Country Club, where they were long time members. She also enjoyed many good times at the “Cape House” in Hyannis with family and friends. Maureen was a devout Catholic who served as a Eucharistic minister at Saint Brendan’s Church in Ormond Beach, Florida for many years. Prior to moving to Holly Hill, Maureen spent most of her days overlooking the ocean on Ormond Beach. She, her family and friends made beautiful memories along the water for many years. She is survived by four children; Stephen Kennedy and his wife, Pattie, Kathi MacLeod, Nancy Flores and her husband, Blaine and John Kennedy and his wife, Lisa, six grandchildren; Stephen Kennedy, Amanda Flores, Amy Kennedy, Derek Flores, Bruce Kennedy and Devyn Kennedy and a brother, James O’Brien. She was predeceased by four brothers, Michael, Patrick, Steven and Jack O’Brien. Maureen loved nothing more than sharing a meal surrounded by her family and friends. Over the years, she enjoyed playing golf, tennis and bridge. She will be forever loved and missed by those who knew her. Her Funeral Mass will be celebrated at 11AM on Saturday, August 3, 2019 in Saint Mary of the Annunciation Church, 24 Conant St., Danvers. Burial will follow in Annunciation Cemetery, Danvers. Visitation will be held from 9-10:30AM prior to the mass on Saturday morning at C.R. Lyons & Sons, Funeral Directors, 28 Elm St, Danvers. In lieu of flowers donations may be made in Maureen’s name to the American Heart Assoc. at www.heart.org.

The family of Mary Ann "Maureen" Kennedy created this Life Tributes page to make it easy to share your memories.