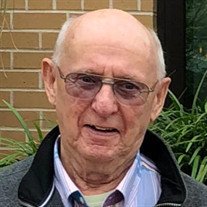 DANVERS- Martin J. “Marty” Murphy, 84, passed away on January 14, 2022, after a brief illness, surrounded by his loving family. He was the husband of Rosemarie (Hutchinson) Murphy with whom he shared over 60 years of marriage. Born in Salem on August 16, 1937, he was the son of the late Martin and Mary (McGilvary) Murphy. Marty was raised and educated in Salem and graduated Salem High School in 1955. He served our country in the United States Navy and was honorably discharged in 1960. Marty was employed with the telephone company for over 30 years. Upon retirement he started his own company, Shamrock Communications. He was a hockey coach for many years and was vital in the establishment of the Mites program for Danvers Youth Hockey. Marty was also a member of the PLAV Drum Corps, the Light Brigade and Crusader Senior Drum Corps. In addition to his wife, Rosemarie, he is survived by six children, Michael Murphy and his wife, Linda Blount of Beverly; Mark Murphy and his husband, Edward Roberts of Haverhill; Shannon Silvestri and her husband, Jamie of Beverly; Kevin Murphy of St. Petersburg, Florida; Brendan Murphy and his girlfriend, Tanya Koeppen of Lafayette, Indiana; and Elisabeth Murphy of Greenville, South Carolina; twelve grandchildren, Jessica, Erin, Kate, Hannah, Jordan, Dylan, Ethan, Nicholas, Kayla, Carmelo, Alberto and Mari; and three great-grandchildren, Aiden, Bryson and Annalyse. His Funeral Service will be held at 11AM on Thursday, January 20, 2022, at C.R. Lyons & Sons, Funeral Directors, 28 Elm St., Danvers. Burial will follow at Walnut Grove Cemetery in Danvers. Visitation will be held from 4-7PM on Wednesday, January 19, 2022, in the funeral home. In lieu of flowers, donations may be made in Marty’s name to Danvers Youth Hockey Association, PO Box 391, Danvers, MA 01923.

DANVERS- Martin J. &#8220;Marty&#8221; Murphy, 84, passed away on January 14, 2022, after a brief illness, surrounded by his loving family. He was the husband of Rosemarie (Hutchinson) Murphy with whom he shared over 60 years of marriage. Born... View Obituary & Service Information

The family of Martin J. Murphy created this Life Tributes page to make it easy to share your memories.