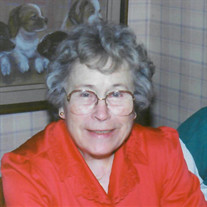 Martha P. (Hubbard) (Butters) O’Neil, 94, died Tuesday evening, November 1, 2016 at her home in Danvers where she resided for more than sixty-five years. She was the wife of the late Edwin S. Butters and the late Alvin F. O’Neil. Born in Beverly on September 29, 1922, she was the daughter of the late William Hubbard and Esther (Roundy) (Hubbard) Grimes. She was raised and educated in Danvers and was a graduate of Holten High School, Class of 1940. Martha was employed for many years at General Electric of Wilmington. An avid knitter, just last year she knitted 90 pairs of mittens for the elementary school children in Warren, NH. She was also fond of doing her own home repair, whether it be shingling, electrical wiring, or even gas fitting. She lived her entire life by the tenets of good old-fashioned Yankee ingenuity. She leaves her devoted family, her children, Patricia Carney and her husband Loyd of Danvers, Nancy Butters and Phyllis Butters, both of Danvers, Terence O’Neil and his wife Sharon of Warren, NH, her grandchildren, Debra Carney Ormes, Terence O’Neil, Jr., and Heather O’Neil, her great-grandchildren, Gwyneth and Ethan Ormes and Patrick, Addison, and Emerson O’Neil, and many nieces and nephews. She was predeceased by her siblings, Lawrence Hubbard, Warren Grimes, Dorothy Oliver, and Esther O’Brien. Her Funeral Service will be Monday, Nov. 7, 2016 at 10AM in C.R. Lyons & Sons Funeral Directors, 28 Elm St., Danvers Square. Burial will follow in Annunciation Cemetery, Danvers. Relatives & friends are invited. Visiting hours are Sunday from 4-7PM in the funeral home. In lieu of flowers, donations in Martha’s memory may be made to VNA of Middlesex-East, 607 North Ave, #17, Wakefield, MA 01880.

Martha P. (Hubbard) (Butters) O&#8217;Neil, 94, died Tuesday evening, November 1, 2016 at her home in Danvers where she resided for more than sixty-five years. She was the wife of the late Edwin S. Butters and the late Alvin F. O&#8217;Neil. Born... View Obituary & Service Information

The family of Martha P. O'Neil created this Life Tributes page to make it easy to share your memories.