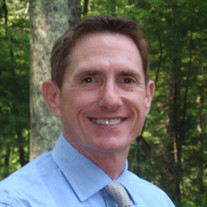 On April 29, 2019, Mark Bayard Gerry, 59, of Topsfield, lost a courageous battle with cancer. He was surrounded by family and passed peacefully. Mark was the son of the late F. Bayard and Dolores A. (Bulman) Gerry. Mark was the loving husband of Edna (DeSouza) and devoted father of Alana C., both of Topsfield. He also leaves behind his brother, Brian Gerry of Derry, NH and his sister Kristin Baker of Burlington, VT, his aunt and godmother, Rita M. Gerry of Bourne, his uncle and aunt William and Helen Bulman of Burlington, MA, his cousins Donald D. Gerry, Jr., Deborah J. Norvell, Franceo M. Haney, Lisa Bulman, William Bulman, and Eric Bulman. Mark was predeceased by his siblings Patrick, Mitchell, and Leslie Gerry and his uncle, Donald D. Gerry, Sr. Raised and educated in Danvers, Mark was a graduate of St. John’s Preparatory School and Jacksonville University in Florida. Mark traveled the world with his business. He worked most recently and for years for Hewlett Packard as the Senior Consulting Sales Executive. He was an avid scratch golfer his entire life. At Salem Country Club, he and his late father hold the Father/Son Club Championship, which they won in 1972, to this day. Mark’s angels during his illness were his wife, Edna, his aunt, Rita Gerry, his cousin, Frances (Gerry) Haney, and her husband, Michael J. Haney. Mark lovingly referred to them as his “Care Team.” His Funeral Mass will be celebrated on Thursday, May 2, 2019 at 9AM in St. Mary of the Annunciation Church, 24 Conant St., Danvers. Burial will follow in Annunciation Cemetery, Danvers. Relatives and friends are invited. Visiting hours are Wednesday from 5-8PM in C.R. Lyons & Sons Funeral Directors, 28 Elm St., Danvers Square. In lieu of flowers, Mark’s cousin Franny will be riding in the Pan Mass Challenge in Mark’s honor to benefit Dana Farber Cancer Research. She is rider FH0026 if you wish to donate.

On April 29, 2019, Mark Bayard Gerry, 59, of Topsfield, lost a courageous battle with cancer. He was surrounded by family and passed peacefully. Mark was the son of the late F. Bayard and Dolores A. (Bulman) Gerry. Mark was the loving husband... View Obituary & Service Information

The family of Mark B. Gerry created this Life Tributes page to make it easy to share your memories.