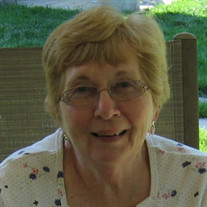 Marjorie J. “June” Gunn, 88, died unexpectedly, surrounded by her family, at Beverly Hospital on Monday, February 14, 2022. She was predeceased by her husband Charles T. Gunn, the Love of her life, in 2009. Together, they enjoyed 58 years of marriage and were, appropriately, reunited on Valentine’s Day. Born in Beverly on May 27, 1933, she was the daughter of the late Angus and Germaine (LeBel) McCormack. Raised and educated in Beverly, she and Charles were long-time Danvers residents before retiring to Seabrook, NH. Following his death, June returned to Beverly to be closer to her family and friends and was fortunate to live independently in her beloved “cottage” ever since. June was employed for many years in the catalog department at Sears & Roebuck in Peabody, prior to which she worked at Hotwatt in Danvers Square. She left a lasting impression wherever she went and many of her coworkers remained life-long friends. June found the good in everyone she met and the bright side of any situation. She was known for her warm smile, thoughtful kindness and generous heart. Adored by many friends, with whom she corresponded regularly and always remembered on special occasions, she will be dearly missed by all having the good fortune of knowing her. What June cherished most was spending time with her family, which she loved deeply. She leaves her children, Charles T. Gunn, Jr. and his wife Christine of Peabody and Cynthia E. Pariseau and her husband Stephen of Danvers, four grandsons, Michael Whalen of Boston, Justin Pariseau of Boston, Matthew Gunn and his wife Armine of Lakeville, and Jonathan Gunn of Jacksonville, OR, two great-grandchildren, Evan and Ella, her siblings, Elaine Barrett, Patricia Lincoln, Linda Corning, William McCormack, and Edward McCormack and her great granddog, Rusty. At June’s request, services are private. In lieu of flowers, donations in her memory may be made to the Plummer Youth Promise, 37 Winter Island Rd., Salem, MA 01970. Arrangements are by C.R. Lyons & Sons Funeral Directors, 28 Elm St., Danvers Square. www.LyonsFuneral.com.

The family of Marjorie June Gunn created this Life Tributes page to make it easy to share your memories.