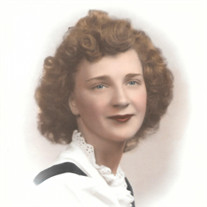 DANVERS- Marjorie Viola (Oulton) Ciman, 87, passed away on January 22, 2016 surrounded by her family. She was the beloved wife of the late Argonne Charles “Chuck” Ciman. Born in Peabody on March 31, 1928, she was the daughter of the late Ralph B. and Bessie J. (Dunn) Oulton. Marjorie was raised and educated in Peabody and graduated from Peabody High School in 1945. She and her husband had resided in Danvers for almost 60 years. She had been employed as an operator for the New England Telephone Co. prior to joining Babco Industries in Danvers starting as switchboard operator and retired as head book keeper. Marjorie also managed to work part time at Skip's Country Store in Rowley where she made many new friends in the Rowley vicinity. She was a Boston sports fan which included the Bruins, Red Sox, and Patriots. Her hobbies included sewing, knitting, books, movies, socializing and cooking. Devoted to family, friends and animals, Marjorie was a very compassionate and thoughtful person. She is survived by her son and daughter-in-law, Charles L. “Skip” and Jeannie Ciman of Rowley, her brother Richard L. Oulton of Danvers, three grandchildren, Talia Kenny of Beverly, Michael Ciman of CA and Erika Ciman Fisher of CA and seven great grandchildren. She was predeceased by her daughter Cheryl DiDonato and grandson Jason DiDonato. Her Funeral Service will be celebrated at 10AM on Saturday, January 30, 2016 at C.R. Lyons & Sons, Funeral Directors, 28 Elm St., Danvers. Visitation will be held prior to the service from 9AM-9:45AM on Saturday, in the funeral home. Burial is private.

The family of Marjorie Viola Ciman created this Life Tributes page to make it easy to share your memories.