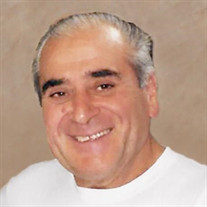 DANVERS- Mario Ciruolo, 73, peacefully passed away, surrounded by his family on July 29, 2018 in Beverly Hospital. He was the devoted husband of Angelina Ciruolo with whom he shared fifty-one years of marriage. Born in Panni, Foggia, Italy on July 7, 1945, he was the son of the late Luigi and Anna (Totilo) Ciruolo. Mario was an extremely hard worker and his work ethic lead him to open his own restaurant in Danvers Square. Mario was the owner and operator of Mario’s’ Restaurant for over twenty years; prior to that he had been employed as a cook at Sam and Joe’s Restaurant. He also was employed with Stop and Shop and Market Basket and enjoyed masonry. When at home, you could find him working in his garden, but his true love was his grandchildren. “Grampy” adored all of his grandchildren and was the center of his family. In addition to his wife, Angelina, he is survived by his children, Anna Marchegiani and her husband, Frank of Danvers, Maria Sammy and her husband, Shwan of Danvers, Gina Reardon and her husband, Steven Reardon of Danvers and Lina Ciruolo Reidy of Danvers, seven loving grandchildren, Gabrielle and Janessa Marchegiani, Ranae and Steven Reardon and Peter, Christina and Jonathan Reidy, his sister, Carolina Cocciardi and her husband Michele of NJ and his brother Antonio Ciruolo of Italy and several nieces, nephews and extended family. He was predeceased by his grandson, Steven Mario Reidy, his son-in-law Peter Reidy, his brother, Raffaele Ciruolo and his sisters-in-law Carmela and Antonietta Ciruolo. His Funeral Mass will be celebrated at 9AM on Thursday, August 2, 2018 in Saint Mary of the Annunciation Church, 24 Conant St., Danvers. Burial will follow in Annunciation Cemetery, Danvers. Visitation will be held from 5-8PM on Wednesday, August 1, 2018 at C.R. Lyons & Sons, Funeral Directors, 28 Elm St., Danvers. In lieu of flowers expressions of sympathy may be made in Mario’s name to Doug Flutie Jr. Foundation for Autism, PO Box 2157, Framingham, MA 01703 or the Make-A-Wish Foundation, 1702 East Highland Ave Suite 400, Phoenix, AZ, 85016.

DANVERS- Mario Ciruolo, 73, peacefully passed away, surrounded by his family on July 29, 2018 in Beverly Hospital. He was the devoted husband of Angelina Ciruolo with whom he shared fifty-one years of marriage. Born in Panni, Foggia, Italy... View Obituary & Service Information

The family of Mario Ciruolo created this Life Tributes page to make it easy to share your memories.