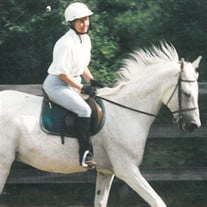 I have been tasked with putting into words my mother’s ‘dash’, that little line between the dates of birth and death that truly defines not how long but how much a person lived. Anyone who knew Marilyn knew that her dash was substantial, filled with positive energy, a zest for life and a passion for helping others. Marilyn Hilton was born to Guy Hilton and Louise Powers Hilton on July 21, 1929 in Marblehead, Massachusetts. She and her older sister, Betty, spoke fondly of their younger years, spending time not only in town but on the Dorsett show sheep operation and farm that Guy managed. Marilyn loved the farm animals, fresh cow milk, and especially the ‘trick’ border collies that her Dad showed. One of her fondest memories was meeting Roy Rogers and Trigger at Boston Gardens behind the scenes, as Guy was on a ‘Wild West Tour’ with Rogers at the time. Guy would later remarry and have a daughter, Debra, who became close with Marilyn in later years. Marilyn attended Marblehead High School and graduated in 1947. As the Drum Major of the MHS marching band, she loved to recount the story of nearly running down a reporter who was in the way of the feisty major as she proudly marched the majorettes and band down the field – the photo snapped at the time reveals a beautiful girl with a look that could kill! Marilyn went on to attend the University of Kentucky but her future husband, Robert ‘Bob’ Leonard Cunningham, handsome football standout and three years her senior, would have none of that. Bob whisked Marilyn off her feet and the two wed on August 7, 1948. Marilyn moved to Maine with Bob where he was attending the University of Maine at Orono to become a Chemical Engineer. Bob and Marilyn would eventually have seven children and move to various locations, as Bob worked his way up in the leather tanning industry. The family ended up back in Marblehead for several years and then in Topsfield, Massachusetts where they remained from 1976 – 2003. Marilyn loved raising her children and was often quoted saying she was hoping for 12 but had to stop at seven. After raising her own children she enjoyed spending time with her six grandchildren who called her ‘Yia Yia’. All of the grandchildren fondly recall being able to eat as much ice cream as they wanted at Yia Yia’s house, along with chips, Coke and other goodies. Marilyn’s interests were many and varied. Besides being a full-time homemaker, she was an accomplished artist, enjoyed volunteering at various school and church functions, enjoyed boating with Bob and the family, and worked as an activities aid at Masconomet Health Center. Her true love, however, was for horses. She was an accomplished equestrian and always found a way to buy (sometimes sneak) horses and ponies for her daughters who shared in her interest. She brought her girls to riding lessons, countless horse shows and competitive trail rides while growing up but finally had time to devote to her own riding in her 50’s once the kids were grown and gone. For the next two decades she enjoyed riding with friends, showing in western classes and finally purchased her last horse Cymon at the age of 68, a beautiful white Arabian whose energy matched her own. Bob passed away in 2002 and Marilyn began a new chapter in her life. She moved to Meeker, Colorado to be closer to her youngest daughter and two youngest grandsons. Marilyn quickly knit herself into the fabric of her new hometown. As a devout Catholic she attended Holy Family Catholic Church and served on the St. Vincent DePaul Committee for several years. She volunteered at the Walbridge Wing in the activities department and anyone who came into the room was quickly caught up in her challenging word games and puzzles. When Marilyn returned to the Walbridge Wing in April of 2016 she felt like she was ‘coming home’. She remembered many friends and co-workers from her earlier years and was remembered by many more. She spent much time socializing and enjoying the mountain views from the porch, visits from family and weekly meals prepared by her youngest grandson that always included a visit with her beloved Welsh Corgi ‘Timmy’. We are comforted by the knowledge that Marilyn was very strong in her Catholic faith and did not fear her own mortality. Marilyn was preceded in death by her husband, Bob, and grandson, Jake Massey. She is survived by her sister Betty Lalonde; sister Debra Doll; son Michael Cunningham; son Robert ‘Bob’ Cunningham Jr.; daughter Sue Cunningham; daughter Linda Cunningham and husband Steve Czarnecki; daughter Teresa Sholomith and husband John Maher; daughter Cindy Cunningham; daughter Mary Gillespie and husband Lee Gillespie. She is also survived by five grandchildren Robert ‘Bob’ Cunningham III; Robert ‘Bob’ Walczak; Amanda Walczak Doherty; Joe Sholomith and Nick Massey and six great grandchildren Julia, Jacob and William Cunningham, Rozlyn and Farrah Sholomith and Ellie Paige Walczak. ‘For it matters not how much we own, The cars, the house, the cash, What matters is how we live and love And how we spend our dash.’ - Linda Ellis Her Memorial Service will be held at 11AM on January 9, 2017 at the C.R. Lyons & Sons, Funeral Directors, 28 Elm St., Danvers. Burial will follow in in Pine Grove Cemetery, Topsfield. www.LyonsFuneral.com

I have been tasked with putting into words my mother&#8217;s &#8216;dash&#8217;, that little line between the dates of birth and death that truly defines not how long but how much a person lived. Anyone who knew Marilyn knew that her dash was... View Obituary & Service Information

The family of Marilyn Cunningham created this Life Tributes page to make it easy to share your memories.

I have been tasked with putting into words my mother’s ‘dash’,...