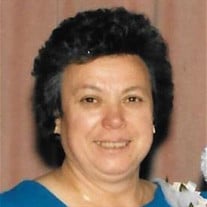 DANVERS-Maria (Dattoli) Ciruolo, 79, passed away peacefully surrounded by her family on February 15, 2018. She was the beloved wife of the late Michele “Mike” Ciruolo. Born in Panni, Foggia, Italy on January 23, 1939, she was the daughter of the late Domenico and Elisa (Cotoia) Dattoli. After marrying her husband in Italy, Maria immigrated to the United States in 1964 and moved to Danvers where she lived and raised her family. Her first job was at Mrs. Day’s Ideal Baby Shoe Company, but she was best known as the owner of Rocco’s Pizza House in Danvers Square. She was a devoted mother and grandmother and loved spending time with her family, especially with her grandchildren. Maria also enjoyed sewing, knitting and working in her garden. She is survived by her two daughters, Antonietta and her husband, John Carlin of Danvers and Dora and her husband, Jamie Strout of Lynnfield. She is also survived by her sister, Addolorata “Dora” and her husband, Joseph Gagnon of Danvers; seven grandchildren, Michaelann Carlin of Charlotte, NC, Kimberly, Adam, Elisa and Andrew Carlin of Danvers and Rachel and Emily Strout of Lynnfield; and a great grandson, Leo Goulet. She also leaves behind many sister-in-laws and brother-in-laws, nieces, nephews and cousins. She was predeceased by her siblings, Antonietta Manserra, Vito Dattoli and Addolorata Dattoli. Her Funeral Mass will be celebrated at 11AM on Tuesday, February 20, 2018 in Saint Mary of the Annunciation Church, 24 Conant St., Danvers. Burial will take place in Annunciation Cemetery, Danvers. Visitation will be held from 5-8PM on Monday at C.R. Lyons & Sons, Funeral Directors, 28 Elm St., Danvers Square. In lieu of flowers donations may be made in Maria’s name to the Danvers Senior Center, 14 Stone St., Danvers, MA, 01923 or Boston Children’s Hospital, c/o Boston Children’s Hospital Trust, 401 Park Dr., Suite 602, Boston, MA, 02215-5301. www.LyonsFuneral.com

The family of Maria Ciruolo created this Life Tributes page to make it easy to share your memories.