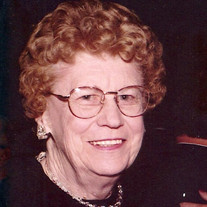 Marguerite A. (Regan) Morris, 94, died Saturday, May 30, 2015 at the Masconomet Healthcare Center in Topsfield following a lengthy illness. She was the loving wife of the late Edward A. Morris. Born in Peabody on April 26, 1921, she was the daughter of the late Francis and Alice (Lynch) Regan. She was raised and educated in Danvers and was a graduate of Holten High School, Class of 1939. She then studied at the former Burroughs School in Boston. Prior to her marriage, Marguerite was employed by the B&M Railroad for thirteen years, and after raising her family was employed at the Superior Court Clerk’s Office until the time of her retirement. A lifelong Danvers resident, she was a longtime member of Our Lady’s Sodality, Court Henry A. Sullivan of the Catholic Daughters of the Americas, and the former Catholic Mr. & Mrs. Club. She was especially proud of nearly six decades of service as a poll worker in Danvers. She leaves two children, Michael Morris and his wife Terry and Ann Gagnon and her husband Ronald, all of Danvers, four grandchildren, Kathryn Morris and her husband Christopher Bodde of Maryland, Margaret Morris of Danvers and her fiancé Neil Dunlop, Daniel Gagnon and Ellen Gagnon, both of Danvers, her sister, Barbara Lawrence of Danvers, and three nephews, Charlie, Mark, and Kevin Lawrence, whom she loved very much. Her Funeral Mass will be celebrated on Saturday, June 6, 2015 at 9AM in Saint Richard Church, 90 Forest St., Danvers. Burial will follow in Annunciation Cemetery, Danvers. Visiting hours are Friday from 4-7PM in C.R. Lyons & Sons, Funeral Directors, 28 Elm St., Danvers Square. In lieu of flowers, donations may be made to the Danvers Historical Society, PO Box 381, Danvers, MA 01923.

Marguerite A. (Regan) Morris, 94, died Saturday, May 30, 2015 at the Masconomet Healthcare Center in Topsfield following a lengthy illness. She was the loving wife of the late Edward A. Morris. Born in Peabody on April 26, 1921, she was the... View Obituary & Service Information

The family of Marguerite A. Morris created this Life Tributes page to make it easy to share your memories.