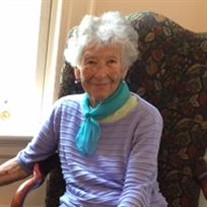 Margery Hilda (Lee) Scott, 98, a lifelong resident of Danvers, passed away on August 22, 2016. Marge was born on August 6, 1918 to the parents of G. Willis Lee and M. Edna (Meade) Lee. She was the wife of the late Claron M. Scott. Marge graduated from Holten High School, class of 1937. As a young woman she worked for the Miller Shoe and the Peabody Maritime Museum in Salem. She was employed for 20 years as a kindergarten teacher at the Miss Perkins Kindergarten, Church of the Nazarene and the Danvers YMCA. After retiring from teaching, she was employed by Almy’s at the Danvers Plaza. Marge loved children which was evident in her career as a devoted kindergarten teacher. She taught Sunday school at Holy Trinity United Methodist Church. She also served on the Board of Christian Education. Marge was a leader in Girl Scouts and Pioneer Girls. But above all she was a great role model to her children, grandchildren and great grandchildren. Marge was the longest living member of 79 years at Holy Trinity United Methodist Church. She was a ‘Good Shepherd’ to many shut-ins within the church community and even after, reluctantly, giving up her driver’s license would walk to friends’ houses to deliver the Sunday bulletin. On Sunday mornings she could be found in the last pew, the seat on the aisle. Marge loved the Peabody Institute Library. She was a Friend of the Library and was an avid reader. You could see the pleasure she received when reading to children. Margery is survived by her son Mark Scott (Maureen) of Winston-Salem, NC, her daughter, Marsha Trott of Danvers, her loving grandchildren Heidi Murphy (Jason) of Danvers, Andrew Trott of Salem, Matthew Scott (Justine) of Clifton, VA, Brenna Drost (PJ) of Lewisville, NC. She was Great Grammy to Caroline and Natalie Drost, Lydia & Estelle Murphy and Maelle & Maeve Scott. She also leaves her loving sister Miriam (Dolly) Snow of Bonita Beach, FL. Besides her husband and parents she was predeceased by her three brothers, whom all passed away as young men, Willis, Edwin & Arthur Lee, and her sister Alice Maloney. Also predeceasing her was her son-in-law Richard “Rinny” Trott. Her Funeral Service will be Friday, August 26, 2016 at 10AM in Holy Trinity United Methodist Church, 16 Sylvan St., Danvers. Burial will follow in Wadsworth Cemetery, Danvers. Relatives and friends are invited. Visiting hours are Thursday from 5-8PM in C.R. Lyons & Sons Funeral Directors, 28 Elm St., Danvers Square. In lieu of flowers, donations in Marge’s name may be made to the Friends of the Peabody Institute Library, 15 Sylvan St., Danvers, MA 01923 or Holy Trinity United Methodist Church, 16 Sylvan St., Danvers, MA 01923.

Margery Hilda (Lee) Scott, 98, a lifelong resident of Danvers, passed away on August 22, 2016. Marge was born on August 6, 1918 to the parents of G. Willis Lee and M. Edna (Meade) Lee. She was the wife of the late Claron M. Scott. Marge graduated... View Obituary & Service Information

The family of Margery H. Scott created this Life Tributes page to make it easy to share your memories.