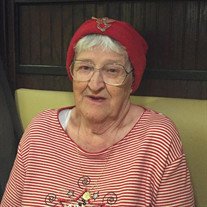 PEABODY- Margaret “Peggy” (Miller) DeLuca, 78, passed away on February 9, 2020. She was the wife of the late Salvatore “Sam” DeLuca. Born in Lynn on March 16, 1941, she was the daughter of the late Carl and Bernice (Wing) Miller. Peggy was raised and educated in Danvers. She resided in Lynn for many years, where she raised her family. Peggy also was employed as a nurse’s assistant for many years at the former Lenox Hill Nursing Home. Peggy enjoyed family gatherings, trips to Foxwoods and watching wrestling and football. She was also an avid reader. She is survived by her sons, Carl DeLuca and his fiancé, Heidi Waring of Bristol, NH and Scott DeLuca and his wife, Janis Harmer of Peabody, nine grandchildren, Tina Mulleavey, James DeLuca, Angela DeLuca-White, Anthony DeLuca and Samantha DeLuca, Scott, Nicole and Andrew Harmer and Kristin DeLuca, eight great grandchildren, Caleb, Tristan, Samuel, Daryl, Nathaniel, Elizabeth, Elijah and Amelia, several nieces and nephews and extended family. Her Funeral Service will be held at 11AM on Thursday, February 13, 2020 at C.R. Lyons & Sons, Funeral Directors, 28 Elm St., Danvers. Burial will follow in Puritan Lawn Memorial Park, Lake St., Peabody. Visitation will be held from 10-11AM prior to the funeral, Thursday morning. In lieu of flowers donations may be made in Peggy’s name to Voices Against Violence, PO Box 53, Plymouth, NH 03264 or http://www.voicesagainstviolence.net

The family of Margaret "Peggy" DeLuca created this Life Tributes page to make it easy to share your memories.