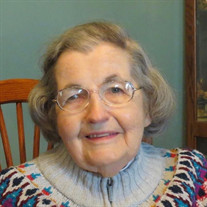 DANVERS- Margaret A. “Peg” (Mahoney) Driscoll, 88, died peacefully on Thursday, March 21, 2019 at Beverly Hospital while surrounded by her family. She was the wife of the late Frederick D. Driscoll. Born in Beverly on January 7, 1931, she was the daughter of the late James G. Mahoney and Margaret M. (Feeney) Mahoney. Margaret was raised and educated in Beverly and resided in Danvers for over 60 years. She was a communicant of St. Mary's parish in Danvers. Margaret was a loving caring woman and her family and her faith were the most important part of her life. She loved and celebrated her Irish Heritage. She had a passion for writing poetry and enjoyed sharing it with her family. She looked forward to and enjoyed her daily visits from her children, grandchildren and great grandchildren as the matriarch of her family. She will be missed deeply. She is survived by four sons and their spouses, James & Martha Driscoll of Danvers, Thomas Driscoll and his partner Cathleen Forster of West Bridgewater, Chris & Sonia Driscoll of Seabrook, NH and Fred and Rachel Driscoll of Danvers; four daughters and their spouses, Brigid & Bruce Bolduc of Danvers, Eileen & Paul Martin of Rochdale, Margaret & Gary Keresey of Raymond, NH and Therese & Andrew Parsons of Bradford, a son-in-law, Michael Listro of Danvers, 23 Grandchildren and 11 Great Grandchildren and many nieces and nephews, as well as her brothers-in-law and sister-in-law, Daniel & Yolanda Driscoll of Beverly and Fr. William Driscoll of Palmer. She was predeceased by 2 daughters, Moira C. Evans and Elizabeth M. Listro who both died in 2009. She was also predeceased by her siblings, George Mahoney, Mary Costello, Helen Mahoney, James Mahoney and Theresa Cass. Her Funeral Mass will be celebrated at 9AM on Wednesday, March 27, 2019 in Saint Mary of the Annunciation Church, 24 Conant St., Danvers. Burial will follow in Annunciation Cemetery, Danvers. Visitation will be held from 4-8PM on Tuesday, March 26, 2019 at C.R. Lyons & Sons, Funeral Directors, 28 Elm St., Danvers. In lieu of flowers, donations may be made in Margaret’s name to the Catholic TV, PO Box 9196, Watertown, MA 02471.

DANVERS- Margaret A. &#8220;Peg&#8221; (Mahoney) Driscoll, 88, died peacefully on Thursday, March 21, 2019 at Beverly Hospital while surrounded by her family. She was the wife of the late Frederick D. Driscoll. Born in Beverly on January 7,... View Obituary & Service Information

The family of Margaret "Peg" Driscoll created this Life Tributes page to make it easy to share your memories.