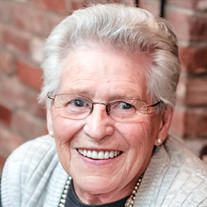 BEVERLY- Margaret “Peg” (Burns) Shea, 85, passed away surrounded by her family on January 18, 2016 in Ledgewood Nursing Home. She was the beloved wife of the late Dennis F. Shea. Born in Beverly on February 3, 1930, she was the daughter of the late John and Annie (Margnot) Burns. She was raised and educated in Beverly and graduated from St. Mary’s School. Peg had been an active member at Saint John the Evangelist Church in Beverly, serving as a Eucharistic minister and a member of the Sodality. Peg was also a past member of the Lothrop Club. She had been a loving cook and care giver at the former Pillsbury House in Danvers and Girdler House in Beverly. She also had been a baker at Henry’s, the Wenham Tea House and Klink’s Bakery. She is survived by her brother, Thomas Burns and his wife Ginger of FL and her sister, Irene Cameron of FL. She was the beloved Aunt Peggy to three generations of nieces and nephews. She was predeceased by nine siblings, Harold, John, Ralph “Buddy”, Lawrence “Lolly”, Richard, Billy and Robert Burns, Josephine Woodbury and Ruth Choate. Her Funeral Mass will be celebrated at 1PM on Friday, January 22, 2016 in Saint John the Evangelist Church, 111 New Balch St., Beverly. Burial will follow in St. Mary’s Cemetery, Salem. Visitation will be held prior to the Mass on Friday from 11AM-12:30PM at C.R. Lyons & Sons, Funeral Directors, 28 Elm St., Danvers. In lieu of flowers, expressions of sympathy may be made in Peg’s name to Saint John the Evangelist School, 111 New Balch St., Beverly, MA, 01915.

The family of Margaret "Peg" T. (Burns) Shea created this Life Tributes page to make it easy to share your memories.