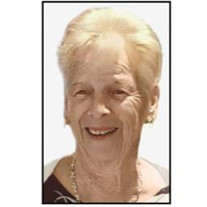 DANVERS - Margaret “Joan” (Walsh) Adrien, 88, passed away on March 26, 2022, surrounded by her family. She was the wife of the late Gilbert Adrien with whom she shared over 50 years of marriage. Born on April 18, 1933, she was the daughter of the late John and Margaret “Rita” (Bonin) Walsh. Joan was a longtime parishioner of Saint Richard’s Parish. She enjoyed her 20+ year employment as a cafeteria worker with the Danvers Public Schools, especially her years spent at the Thorpe School. She was an amazing baker, known for her famous banana bread and apple pie. Joan proudly served until recently, as a board member of the Independent Living Center of Salem (now known as the Disability Resource Center, Inc.), which her late husband, Gil, helped establish 35 years ago. The Center’s mission is to help people with disabilities live independently. Joan enjoyed spending time with her many friends. This included her monthly Tuesday Night Dinner Club at the Danversport Yacht Club, being a member of the Hampshire Street Howlers, and attending dinners at the Senior Center. She loved the many summers spent with her family and friends camping and boating up at Long Lake. She was a devoted grandmother; her three grandsons were her pride and joy. Dear Mother to her three sons, John Adrien and his partner, Noreen Cousins of Peabody; David Adrien and his wife, Sharon of Concord, NH and Paul Adrien and his wife, Stacey of Danvers. Dear Sister of Carol Sanderson Marsi of Woburn. Beloved Grammy to Alex, Cooper and Caden Adrien. She is also survived by several nieces and nephews. She was predeceased by her brother, John R. Walsh, Jr. Her Funeral Mass will be celebrated at 9AM on Monday, April 4, 2022, at Saint Richard Church, 90 Forest St., Danvers. Visitation will be held from 4-7PM on Sunday, April 3, 2022 at C.R. Lyons & Sons, Funeral Directors, 28 Elm St., Danvers. In lieu of flowers, donations may be made in Joan’s name to: The Disability Resource Center, Inc., 27 Congress St. Suite 107, Salem, MA, 01970. www.disabilityrc.org.

The family of Margaret "Joan" Adrien created this Life Tributes page to make it easy to share your memories.