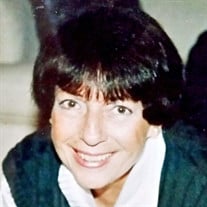 I lived a remarkable 79 years with a life full of unconditional love, laughter and adventures. Born in San Francisco, California on May 21, 1936, I attended parochial schools throughout, ultimately graduating from St. Paul’s High School in 1954. I continued my studies at San Francisco College for Women and University of San Francisco, graduating with a B.A. in Art History in 1958. Upon graduating, I began a nearly 25 year career in the retail industry working as a manager and assistant buyer in sportswear and home goods. Starting at The Emporium, my career quickly escalated to one where I was one of the few women buyers in the industry managing women’s sportswear at Joseph Magnin Co., one of the largest retailers in San Francisco, and Boston’s Filene’s & Co. During one of my European work travels in 1963, I met the love of my life, Richard N. Finocchio, aboard the S.S. Constitution where he was 1st Officer. Together we travelled throughout Europe and the Mediterranean, enjoying camel rides in Egypt, hiking Mount Vesuvius and enjoying the Amalfi coast to its finest. Shortly thereafter, we married, and have enjoyed over 50 years of marriage together and were blessed with our daughter, Karen and her husband Christopher Lubeck. Throughout those 50 years, we have lived in Marblehead, Massachusetts. I founded my own interior design firm, Atelier, where I earned national recognition for my work in House and Garden magazine. After 15 years decorating, I moved onto my greatest career challenge, a 20 year battle with Alzheimer’s where I have been a lead research case in several treatments. As I reflect back, I am humbled to see how many families I have helped. Without the incredible care from my husband, daughter and sister-in-law, Judith Finocchio, along with an amazing care team of Marilyn, Dora and Peggy, this never would have happened. I have shared my sparkle with medical teams and caregivers. Funeral Service will be celebrated at 10AM on September 26, 2015 in Saint Stephens United Methodist Church, 67 Cornell Rd., Marblehead. Burial will follow in Waterside Cemetery, Marblehead. Visiting hours will be held from 4-8PM on Friday, also in the church. To honor my sparkle, I ask that instead of flowers, you donate in my memory, Mrs. Louise Finocchio, to the Alzheimer’s Association MA/NH Chapter, 480 Pleasant Street, Watertown, MA 02472/ www.alzmass.org or to support the research work of Dr. Haytham Kaafarani at Massachusetts General Hospital. Donations may be made online at giving.massgeneral.org or checks made payable to Mass General can be mailed to: Massachusetts General Hospital, Development Office, 125 Nashua Street; Suite 540, Boston, MA 02114.

I lived a remarkable 79 years with a life full of unconditional love, laughter and adventures. Born in San Francisco, California on May 21, 1936, I attended parochial schools throughout, ultimately graduating from St. Paul&#8217;s High School... View Obituary & Service Information

The family of Louise (Hansen) Finocchio created this Life Tributes page to make it easy to share your memories.

I lived a remarkable 79 years with a life full of unconditional...