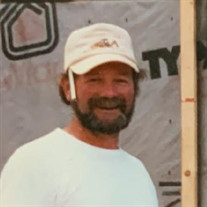 Louis B. Thompson, Jr., 71, of Danvers, passed into the presence of the Lord on January 8, 2022 at the Holy Family Hospital in Methuen surrounded by his loving family. Born on January 6, 1951 in Louisville, KY to Mary George (Atcher) Thompson and the late Louis Thompson, he was raised and educated in Louisville and graduated from Bishop David High School. Lou moved to Danvers with his wife, Fronie McNichol, just before finishing his electrical apprenticeship in Louisville. Loved by all who knew him, Lou was never too busy for a chat and never lost his sweet southern drawl. Described as a “gentle giant” and known for his kindness and generosity, he was mostly self-employed as a master carpenter/builder and left a legacy of many beautiful homes all over New England. An incredibly skilled craftsman, he was “built for love” and could fix anything (and also teach you how to while he was at it). Lou loved to dance, play guitar/banjo/mandolin, sing Bluegrass music, and drive his Ford F150. He resided on the North Shore off and on for over thirty-five years. In addition to his mother, he leaves a daughter, Molly Pecukonis and her husband Matt of Sheridan, WY, a stepdaughter, Sheila Hubbard and her husband Rob of Rochester, NH, a stepson, Chuck Leary and his wife Jody of China, ME, a godson, Travis Kilroy, of Middleton, MA, and several “adopted” children, five grandchildren – Joe Marcellino, Nick Makepeace, Valerie Hayward, Olivia Leary, and Paige Leary – his siblings, Pam, Teresa, Brenda, Bev, Chris, and Tony, and many nieces and nephews. All are invited to attend his 71st birthday party/celebration of life on Saturday, January 15, 2022 from 11:30am–3:30pm at the American Legion, 69 River St, Middleton, MA. In lieu of flowers, donations in Lou’s name may be made to St. Labre Indian School, Tongue River Rd, Ashland, MT 59003. Arrangements are by C.R. Lyons & Sons Funeral Directors, 28 Elm St., Danvers Square. To share an expression of sympathy, please visit www.LyonsFuneral.com.

Louis B. Thompson, Jr., 71, of Danvers, passed into the presence of the Lord on January 8, 2022 at the Holy Family Hospital in Methuen surrounded by his loving family. Born on January 6, 1951 in Louisville, KY to Mary George (Atcher) Thompson... View Obituary & Service Information

The family of Louis B. Thompson Jr. created this Life Tributes page to make it easy to share your memories.