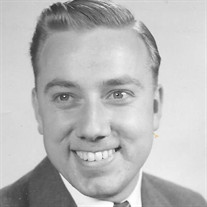 DANVERS- Louis J. Theriault, Jr, 81, passed away on March 9, 2016 in Masconomet Healthcare Center. He was the loving husband of Antoinette (Conti) Theriault with whom they shared 57 years of marriage. Born in Salem on June 2, 1934, he was the son of the late Louis J. and MarieAnn (Roi) Theriault. Lou was raised and educated in Danvers and graduated from Holten High School in 1952. He went on to receive both his bachelor and master degrees from Salem State College. Lou spent 13 years as the continuing education director at Salem State College, where he was instrumental in initiating a scholarship program for student nurses in need. He was also a professor at Salem State for many years for the business education department. Louis loved opera, and spent many hours listening to the arias of great artists. He had a beautiful baritone voice and had been a soloist at Saint Mary of the Annunciation for 38 years. He also had a dry wit, which everyone enjoyed. In addition to his wife Toni, he is survived by three daughters, Rosanne Tysz of Ohio, Roberta Theriault of MT and Elaine Theriault of AZ, eight grandchildren, Daniel, Clare, Joshua and his wife Caitlin, John-Paul, Francis, Jessica , Michelle and Elizabeth. He is also survived by his sister, Shirley Levasseur of Danvers and several loving nieces and nephews. He was predeceased by his siblings, Anita and Norman. His Funeral Mass will be celebrated at 9AM on Saturday, March 12, 2016 in Saint Mary of the Annunciation Church, 24 Conant St., Danvers. Burial will follow in Annunciation Cemetery, Danvers. Visitation will be held from 4-7PM on Friday, March 11, 2016 at C.R. Lyons & Sons, Funeral Directors, 28 Elm St., Danvers. In lieu of flowers, donations may be made in Lou’s name to Parkinson’s Disease Foundation, 1359 Broadway, Suite 1509, NY, NY, 10018 or the United Ostomy Assoc. of America, PO Box 512, Northfield, MN 55057.

DANVERS- Louis J. Theriault, Jr, 81, passed away on March 9, 2016 in Masconomet Healthcare Center. He was the loving husband of Antoinette (Conti) Theriault with whom they shared 57 years of marriage. Born in Salem on June 2, 1934, he was... View Obituary & Service Information

The family of Louis Joseph Theriault, Jr. created this Life Tributes page to make it easy to share your memories.